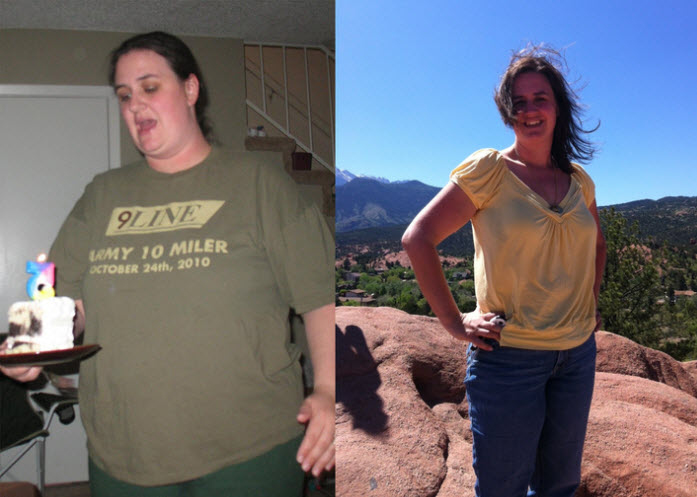 I made the commitment to lose weight in January 2011 at nearly 250 pounds. I had been overweight most of my life and was in complete denial as to how far I had let myself go. Every morning when I woke up, my left arm would be numb. I could barely walk down the stairs. Keeping up with my two daughters (5 and 2 at the time) was nearly impossible.

After a few months of watching my diet and losing about 30 pounds, I decided to take up running with the Couch to 5k program. When I ran three continuous minutes, I cried. I had never seen myself as athletic and suddenly, it seemed possible that I could be a runner. My sister talked me into signing up for a 5k in June 2011. I was terrified and all I could think was that I wouldn’t be able to finish, that I would be the last person, that I would be the fattest person. Self-doubt hit me full-force, but my sister wouldn’t let me back out. I had to walk a little bit, but I finished that first 5k in under 40 minutes.

Since then I have run numerous races: many 5ks (I even placed 3rd in my age group recently), two 10ks, one 8k, two Army Ten Milers in D.C., and two half marathons. Most recently I ran the Ragnar Relay Florida Keys with an amazing group of women and a few guys who have all lost weight through running.

I have lost 70 pounds in the last two years and I still have about 30 more to lose. To add some variety into my workouts, I joined a boot camp class last year. Having someone tell me exactly what to do is a huge plus. I don’t have to think about my workout, I just do it.

What has been key to my continued success is a wonderful online support group. We call ourselves the Turtles (“slow and steady wins the race”). We keep in touch mostly through Facebook and we plan races together to meet up: the Townebank Shamrock 8k in Virginia Beach in 2012 was our first event. A few of the Turtles met up for a Dirty Girl Mud Run. Our most recent meet up was the Ragnar Relay Florida Keys. We are located all over the U.S. (Texas, Florida, California, Wisconsin, New Jersey, Ohio, to name a few locations).

We range in age from 30s to 50s. We are married, single, divorced; we are stay-at-home moms and full-time working moms; we are individuals who have always been overweight and who were athletic as teenagers but gained weight later in life. The support of the Turtles has been instrumental in keeping my focus on the long-range journey to better health and better fitness that I am on.

In 2013, I want to refocus and get back to basics. I want to make running fun again and not be a chore. I want to continue to work on my emotional eating habits and learn to be healthy, fit and active.

Related Itemsrunning
← Previous Story Nicole Lost 125 pounds by making diet and exercise a priority
Next Story → 82 Pounds Lost: The Big Rig That Could… and DID!!!