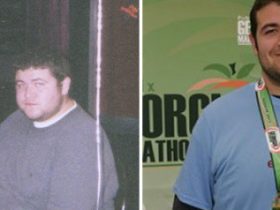 Men Before And After Weight Loss: Ben Lost 170 Pounds By Cutting Out Soda And Eating Healthy

MINNEAPOLIS, MINNESOTA: Barbara Barry, 36 of Minneapolis, struggled with her weight for as long as she can remember. As a child, her greatest anxiety was fitting in to the desk at school. As she got older, fast food was a daily, sometimes twice a day staple. “I was afraid to go home and be alone without food,” she admits. Her weight became a humiliating struggle. She was once egged while riding her bicycle, and ridiculed by a group of parade participants calling her “far girl” from a passing float.

In November 2002, a friend encouraged Barb to run in a 5k road race called the Thanksgiving day Turkey Trot. Barb walked some of the course, but finished positive and excited about the running community. The experience left her hopeful that she could shed some of her 285 lb frame while doing something she enjoyed. Without much more thought, she signed up for the Twin Cities marathon that following October, which allotted 11 months to train. Setting the goal kept Barb on track to complete the marathon in 5 hours, thirty minutes. And accomplishing that goal gave her the inspiration to keep going. That was five years and 125 lbs ago.

Today, Barb has countless road race finishes under her belt and has completed several triathlons. Her training and commitment to the sport, coupled with a balanced diet and attendance at Weight Watchers meetings has helped her shed the weight, and she’s not finished yet.

This September, Barb will be competing in the Square Lake Half Ironman Triathlon. The grueling race consists of a 1.2 mile swim, 56 mile bike course, and a 13.2 mile run. The race is the most ambitious commitment she’s made yet, requiring two hours of training each day. And Barb is not alone in her enthusiasm. “The growth of amateur interest in the sport of triathlon in the last few years is unprecedented,” says Randy Fulton, director of Vacation Sports in Minnesota, the promoter of the Square Lake Half Iron race. In 2001, the Square Lake Half Iron was the only race of its distance in the State. Most racers participate in the half iron as a springboard for an eventual full ironman, a legendary race reserved only for the most committed endurance athletes.

Fulton attributes the rapid growth in the sport to the demographic of “bored runners looking for something new.” There has also been a rise in available venues. Once the only half iron in the Minnesota twin cities area, Fulton explains that there are now three or fourth half iron races per season.

Barb’s foray into the sport, meanwhile, “feel like a re-birth.” She sums up her transformation this way:

“I think the biggest thing for me is feeling like I fit in now. No more dreading the task of shopping for an outfit because I’m limited to plus size stores. No more walking past a group of people in fear of someone yelling out some esteem-smashing comment about my appearance. As for how I feel about triathlons, it’s all about the personal growth that comes from training and crossing the finish line, not to mention the look of total shock and confusion on the faces of long time family and friends when I tell them what I’ve done!”

The Square Lake Triathlon Half Iron takes place on September 7, 2008 in Stillwater, Minnesota. 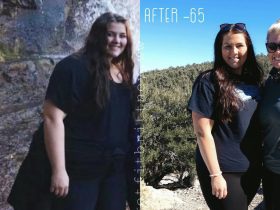