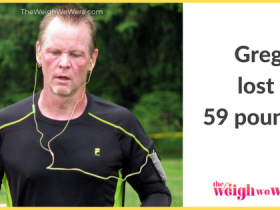 Valerie’s challenge As a hairdresser on her feet up to 10 hours a day and a single mother to a premature baby with health problems, Valerie MacWilliam had a very demanding schedule. While she hired baby sitters to take care of her daughter during the day, Valerie often had to get up three or four times a night to care for her daughter.

To fuel her long days, Valerie relied on a diet of fast food and drank six to 12 cans of caffeinated diet soda a day. “My schedule was jampacked. I was running around trying to get everything done and I didn’t feel like I had time to think about what I ate,” she recalls.

Her turning point Three years after her daughter was born, the demands of Valerie’s stressful life caught up with her. She was 60 pounds overweight and always exhausted. “I needed to take better care of myself if I wanted to provide the best care for my daughter,” Valerie says.

Her weight-loss & exercise plan First, Valerie eliminated soda and switched to water and juice. Then, she cut out fast food and concentrated on eating healthfully. She spent 15 minutes each morning chopping up fruits and vegetables, storing them in a small cooler she took with her to work. “Having healthful food with me was a lifesaver,” Valerie says. “I ate a small meal every few hours, and I never felt hungry.”

Since Valerie’s schedule didn’t allow her time to work out at a gym, she used dumbbells and a weight bench to do cardio-and-weight-training circuits at home.

Making success happen After a month, Valerie’s program started paying off. “As I became stronger, I increased the weight of the dumbbells and lost about a pound a week,” she says. “I felt better than I had in years.”

Six months and 30 pounds later, Valerie suffered a serious setback: A car accident left her with a torn rotator cuff. Following the surgery she underwent to repair the damage, her doctor told her it would be at least two months until she could use her shoulder again. “I got depressed after the accident,” Valerie says. “I felt grateful to be alive, but I had worked so hard to lose weight and was afraid that since I wasn’t allowed to exercise, I would regain what I’d lost.”

Three weeks after surgery, Valerie talked to a physical therapist. “He told me I could still do cardio and strengthen my lower body while my upper body recovered,” she says.

The accident had a positive dividend: Valerie’s work schedule eased up, allowing her to join a gym, where she ran on the treadmill or stair climbed three to four times a week in addition to strength training. She also stayed committed to her healthful eating habits. “I felt strong. Regular workouts boosted my spirits, and my depression started to lift,” she says.

With her doctor’s OK, she resumed her upper-body strength-training program. She also kept up with her cardio and ate well, which helped her shed 30 more pounds. She now works out four to five times a week for an hour doing weight-training circuits and running.

“Even though it took me more than three years to reach my goals, it was worth it,” Valerie says. “Everything takes time and hard work.”