Home » The Scale Lies! Find out exactly why it changes day-to-day… 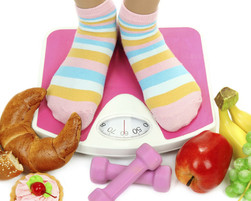 We’ve been told over an over again that daily weighing is unnecessary, yet many of us can’t resist peeking at that number every morning. If you just can’t bring yourself to toss the scale in the trash, you should definitely familiarize yourself with the many reasons it fluctuates day-to-day…

A single teaspoon of salt contains over 2,000 mg of sodium. Generally, we should only eat between 1,000 and 3,000 mg of sodium a day, so it’s easy to go overboard. Sodium is a sneaky substance. You would expect it to be most highly concentrated in salty chips, nuts, and crackers. However, a food doesn’t have to taste salty to be loaded with sodium. A half cup of instant pudding actually contains nearly four times as much sodium as an ounce of salted nuts, 460 mg in the pudding versus 123 mg in the nuts. The more highly processed a food is, the more likely it is to have a high sodium content.

That’s why, when it comes to eating, it’s wise to stick mainly to the basics: fruits, vegetables, lean meat, beans, and whole grains. Be sure to read the labels on canned foods, boxed mixes, and frozen dinners. Women may also retain several pounds of water prior to menstruation. This is very common and the weight will likely disappear as quickly as it arrives. Pre-menstrual water-weight gain can be minimized by drinking plenty of water, maintaining an exercise program, and keeping high-sodium processed foods to a minimum.

Another factor that can influence the scale is glycogen. Think of glycogen as a fuel tank full of stored carbohydrate. Some glycogen is stored in the liver and some is stored the muscles themselves. This energy reserve weighs more than a pound and it’s packaged with 3-4 pounds of water when it’s stored. Your glycogen supply will shrink during the day if you fail to take in enough carbohydrates. As the glycogen supply shrinks you will experience a small imperceptible increase in appetite and your body will restore this fuel reserve along with it’s associated water. It’s normal to experience glycogen and water weight shifts of up to 2 pounds per day even with no changes in your calorie intake or activity level. These fluctuations have nothing to do with fat loss, although they can make for some unnecessarily dramatic weigh-ins if you’re prone to obsessing over the number on the scale.

Otherwise rational people also tend to forget about the actual weight of the food they eat. For this reason, it’s wise to weigh yourself first thing in the morning before you’ve had anything to eat or drink. Swallowing a bunch of food before you step on the scale is no different than putting a bunch of rocks in your pocket. The 5 pounds that you gain right after a huge dinner is not fat. It’s the actual weight of everything you’ve had to eat and drink. The added weight of the meal will be gone several hours later when you’ve finished digesting it.

Exercise physiologists tell us that in order to store one pound of fat, you need to eat 3,500 calories more than your body is able to burn. In other words, to actually store the above dinner as 5 pounds of fat, it would have to contain a whopping 17,500 calories. This is not likely, in fact it’s not humanly possible. So when the scale goes up 3 or 4 pounds overnight, rest easy, it’s likely to be water, glycogen, and the weight of your dinner. Keep in mind that the 3,500 calorie rule works in reverse also. In order to lose one pound of fat you need to burn 3,500 calories more than you take in. Generally, it’s only possible to lose 1-2 pounds of fat per week. When you follow a very low calorie diet that causes your weight to drop 10 pounds in 7 days, it’s physically impossible for all of that to be fat. What you’re really losing is water, glycogen, and muscle.

This brings us to the scale’s sneakiest attribute. It doesn’t just weigh fat. It weighs muscle, bone, water, internal organs and all. When you lose “weight,” that doesn’t necessarily mean that you’ve lost fat. In fact, the scale has no way of telling you what you’ve lost (or gained). Losing muscle is nothing to celebrate. Muscle is a metabolically active tissue. The more muscle you have the more calories your body burns, even when you’re just sitting around. That’s one reason why a fit, active person is able to eat considerably more food than the dieter who is unwittingly destroying muscle tissue.

Robin Landis, author of “Body Fueling,” compares fat and muscles to feathers and gold. One pound of fat is like a big fluffy, lumpy bunch of feathers, and one pound of muscle is small and valuable like a piece of gold. Obviously, you want to lose the dumpy, bulky feathers and keep the sleek beautiful gold. The problem with the scale is that it doesn’t differentiate between the two. It can’t tell you how much of your total body weight is lean tissue and how much is fat. There are several other measuring techniques that can accomplish this, although they vary in convenience, accuracy, and cost. Skin-fold calipers pinch and measure fat folds at various locations on the body, hydrostatic (or underwater) weighing involves exhaling all of the air from your lungs before being lowered into a tank of water, and bioelectrical impedance measures the degree to which your body fat impedes a mild electrical current. If the thought of being pinched, dunked, or gently zapped just doesn’t appeal to you, don’t worry. The best measurement tool of all turns out to be your very own eyes. How do you look? How do you feel? How do your clothes fit? Are your rings looser? Do your muscles feel firmer? These are the true measurements of success. If you are exercising and eating right, don’t be discouraged by a small gain on the scale.

Fluctuations are perfectly normal. Expect them to happen and take them in stride. It’s a matter of mind over scale.