Why is it easier to lose 2-4 pounds rather than 3 pounds? 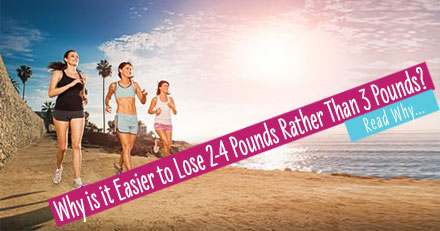 Consumers are more likely to pursue goals when they are ambitious yet flexible, according to a new study in the Journal of Consumer Research.

“Whether a goal is a high-low range goal (lose 2 to 4 pounds this week) or a single number goal (lose 3 pounds this week) has a systematic effect on goal reengagement. High-low range goals influence consumer goal reengagement through feelings of accomplishment, which itself is driven by the attainability and challenge of the goal,” write authors Maura L. Scott (Florida State University) and Stephen M. Nowlis (Washington University in St. Louis).

Consumers often have a choice about the types of goals they want to set for themselves, and they may want to repeat various goals over time. For example, consumers often reengage goals such as losing weight, saving money, or improving their exercise or sports performance.

In one study, consumers in a weight loss program set either high-low range goals or single number goals. At the end of the program, consumers with high-low range goalsreenrolled in the program at higher rates even though there was no difference in actual average weight loss across the two groups. In other studies, consumers exhibited similar behaviors with other goals such as resisting tempting foods, solving puzzles, or playing a grocery shopping game.

A high-low range goal can offer “the best of both worlds” compared to a single number goal due to its flexibility: the high end of the goal (lose 4 pounds) increases the challenge of the goal, while the low end (lose 2 pounds) increases its attainability. On the other hand, a single number goal (lose 3 pounds) may be perceived as a compromise and therefore both less challenging and less attainable.

“Consumers are more likely to pursue a goal when they set a high-low range goal instead of a single number goal. Consumers experience a greater sense of accomplishment when a goal is both attainable and challenging, and this makes them want to continue to pursue or reengage their goal,” the authors conclude.