“Why I Lost the Weight” 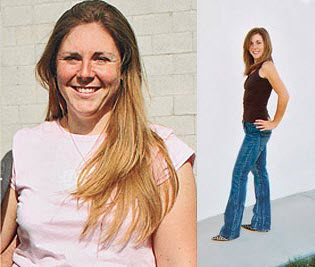 Nikkol Gomez’s food problems started when she was in the sixth grade. “I was forced to clean my plate at every meal, leading to a regular habit of overeating that pushed my weight to 160 pounds by age 11,” she says. In high school, she struggled with an eating disorder. Her weight dropped down to 112 pounds. “I knew my behavior was unhealthy,” recalls the 30-year-old preschool teacher, but she couldn’t stop — until she became pregnant at the age of 19. Determined to overcome her eating disorder for the sake of her baby, she ate — and overate. Nikkol gained 50 pounds during her pregnancy and was up to 165 pounds after the birth of her second child a few years later. “With work and two kids, I felt too exhausted to do any activity other than cleaning the house,” she recalls.

Then came her 29th birthday in January 2005. “I resolved to be healthier and have more energy, for myself and my family, by the time I turned 30,” she says. Nikkol signed up with Weight Watchers. She also started walking to and from her weigh-ins (four miles) and doing upper- and lower-body weight training three times a week. Soon she was losing a pound or two a week, and after three months, she upped her routine to jogging four times a week. By December 2005, she was running five miles at a time and had reached her goal weight of 120 pounds — just in time for her 30th birthday.

Nikkol recently completed the Avon Walk for Breast Cancer in Long Beach, California, a two-day, 39-mile trek to raise money for breast cancer research, a cause that’s especially meaningful to her since her mom was diagnosed with the disease last year. “Conquering my eating problems made me realize that I can do anything, even walk 26 miles in one day,” she says.

Nikkol’s Weight-Loss Plan
My Diet: “For breakfast, I have oatmeal and blueberries. Lunch is turkey on whole-grain bread with vegetables. Dinner is grilled chicken, a baked sweet potato, and spinach salad. I snack on fruit, yogurt, and nuts.”
My Guilty Pleasure: “Low-calorie Hershey’s Sticks.”
My Workout: “I walk or jog five miles, then strength-train for 30 to 45 minutes four times a week.”
My #1 Motivator: “I turn on Top 40 radio and dance.”