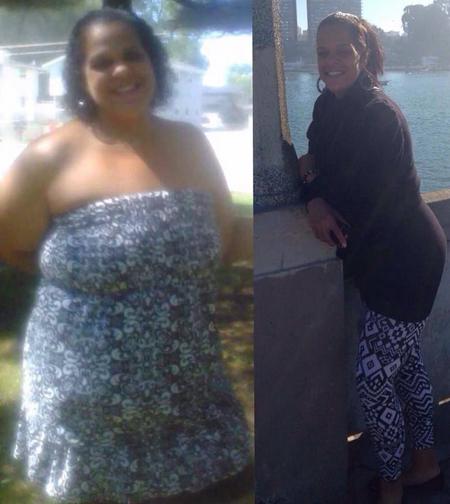 My name is Kathleen Turner.I have been overweight my entire life, however I gained alot of weight between the years of 18-39!! Lots of hurtful life events happen to me during those years, in which I proceeded to emotionally eat due to them. At 39 I weighed 322 pounds.

I was a wounded woman mentally,physically, and emotionally. I however, had to continue living because I have three beautiful daughters who needed me and who I needed too. Because of the love of my daughters I have continued to push myself to be the best I could possibly be.That meant going back to college in January 2009. I was set to graduate in May 2013, and I did not want to weigh 322 pounds walking across the stage.

I also would turn 40 on July 4, 2013, and I definetly did not want another birthday year celebrated considered morbidly obese according to my physicians records. In January of 2012, I began doing positive affirmations in which every day I would say something positive to myself about my weight.It went something like this,” I am beautiful and my body is beautiful, I feed it only healthy and nourishing foods.”

I proceeded to do this daily for 6 months and in the process of doing these affirmations I met the most beautiful man both physically and spiritually.I did not think he would ever be interested in me more than a friend, but I didn’t care because he was awesome to talk to and beautiful to look at.

RELATED:   How Changing My Mindset Helped Me Lose 185 Pounds

Our first date would be on my 39th birthday July 4,2012. It was hot that day and when he arrived to pick me up he had on a tank top which just made his muscles look huge. I was smitten, but remember I did not think he would take interest in this woman who was 6’2 and weighed 322 pounds. Our conversation was great and we just got along so well, so I asked him if he worked out every day.

He proceeded to say, “3-5 times a week” I told him I needed help in the gym and his response was, “I will help you” OMG are you kidding me was my thought! I proceeded to tell him I could not pay him because I was a single mother working part time and finishing my bachelors degree.

He said, “I am not asking you to pay me,you can pay me with hugs and kisses”. Ummmm let me just say right there I lit up like the fourth of July day that it was! After we left lunch he said, “take me to your gym” I said, ‘NOW’ and his reponse was, “Yes”! So we went to my gym and he looked around and said ok “We start tomorrow!” “Tomorrow?” I said! “Tomorrow” he repeated! Let me assure you the 24 hours between then and the next day was awful. All I could think of was I can’t dress up fat in the gym.

What would he think of me when he seen me sweating and breathing heavy because I rarely exercised a day in my life. I however, prayed and I thought if this man is willing to help me I am willing to look a mess as I shed off this weight! I wanted it that bad. Not only for me but for my children.I wanted to be healthy and I also want to be a great example to them.

He picked me up the next day in the rest is history. He and I have been working out 3-5 times a week daily and the best part is we truly love each other! I did graduate in May of 2013, 90 pound lighter and I turned 40 in July of 2013, 100 pounds lighter. Over the process of my journey I had to deal with unresolved wounds that I had buried over the years.

One of the most hurtful events in my life was when I was raped at the age of 18.I have put together a silent video that is very powerful and helped me to begin to heal that wound. Which by the way was what was causing the majority of the outward manifestation of weight to appear on my frame. I have plans of starting a business called Weight loss through healing. http://www.youtube.com/watch?v=GriuTjxcwvA&feature=youtu.be