After weight loss surgery, people could experience discrimination when interviewing for jobs 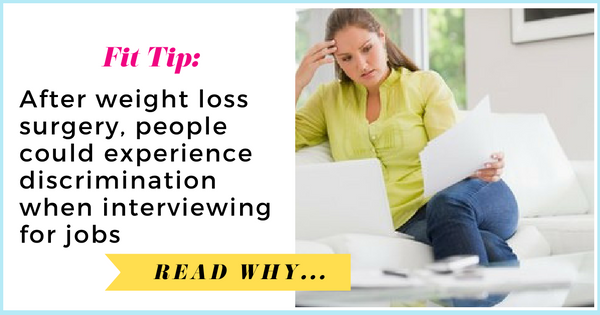 People say that they would be more likely to hire someone who has lost weight through exercise and dieting than through surgery. This is just one of the stigmas faced by obese people who undergo weight-reducing bariatric surgery, reports Robert Carels of East Carolina University in the US and his team of researchers. The findings are published in Springer’s journal Obesity Surgery.

Over 100,000 bariatric surgeries are performed annually in the US, and in many cases ensure substantial and sustained long-term weight loss for obese people. Despite such success, it is often frowned upon and regarded as a “quick fix.” This might be because obese people are often regarded as lazy and undisciplined, and because of the long-held belief that body weight can largely be controlled through diet and exercise.

To investigate how such beliefs might influence people’s employability, Carels’ team asked 154 participants to rate their impressions of a woman. They were shown two photographs: on the first she was of normal weight, and on the second she was overweight. While being shown the second photograph, participants read different scenarios about how she previously gained and then lost weight. Different reasons were given for the weight gain and the weight loss. The reason for weight loss had a greater impact on how people were judged than the cause of their initial weight gain. In all, participants were less willing to hire someone who had lost weight through surgery rather than through a change in lifestyle and behavior. They rated the individual far less favorably if they thought that she had shed the pounds thanks to surgery rather than by dieting or exercising.

The reasons why people gained weight only modestly affected how they were perceived. Participants felt the woman was less responsible for her weight when they had read that she had gained weight because of medical reasons, rather than from overeating, living a sedentary lifestyle or being unable to stop eating. She was rated as least self-disciplined if she admitted gaining extra pounds after unsuccessful weight loss surgery. This is consistent with research emphasizing personal responsibility in weight gain.

The disadvantages in hiring, wages, promotions, and job termination resulting from weight stigma are well documented, and therefore seem to extend to the hiring of previously obese people who lost weight surgically. Carels finds the results alarming, because individuals with obesity have few legal remedies for workplace discrimination. Additionally, sharing information about prior bariatric surgery with a boss or co-worker might not be advantageous.

“Weight stigma is impacted by the method of weight loss for formerly obese individuals, not just obese individuals,” says Carels. “While bariatric surgery often results in sustained long-term weight loss, increased efforts are needed to reduce stigma associated with bariatric surgery to ensure that people who may benefit from this procedure are not deterred owing to continued stigma in various settings.”