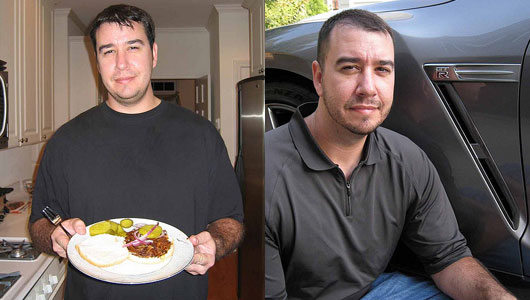 This Atlanta resident lost more than 50 pounds with healthy eating and a boot camp exercise program.

For Shawn Gorrell, a 41-year-old Atlanta resident who lost more than 50 pounds, it was the camaraderie and motivation of working in a group that finally changed his life.

Like so many others, he’d worked out at the gym many times before — but not consistently. With no one to push him and only having to answer to himself, Gorrell wasn’t motivated enough to do the kind of work that would bring life-changing results.

Gorrell became interested in a boot camp through a friend, and planned on joining for only a month. But at Operation Boot Camp, things finally fell into place.

Using a log book, participants kept track of what they ate and how often they exercised, creating the key motivator of accountability. Gorrell’s weight started heading downward, his eating habits changed and he found his life taking on a new shape. He even became an instructor for Operation Boot Camp.

But, before he adopted the boot camp lifestyle, Gorrell’s morning routine was a mish-mash of bad food and best intentions. He’d wake up and enjoy a breakfast of chocolate chip pancakes with butter, bacon, and plenty of coffee. He’d then head to the gym — or not.

These days, Gorrell wakes at 5 a.m., enjoys a breakfast of non-fat Greek yogurt and high-fiber granola, and then it’s off to meet the boot camp group. Knowing they are expecting him keeps Gorrell motivated, even on difficult mornings. After the workout, Gorrell treats himself to a triple venti non-fat latte.

“The struggles are always the same, but they become manageable,” he says. “In the boot camp, you are very strict. Once you leave, you have to find your way back to a place that works for you. It’s tough to translate everything you pick up in the boot camp back to real life.”

Gorrell had to figure out what he could add back to his diet to still live normally and happily.

For individuals who are trying to create a healthier lifestyle, his advice is to be realistic — and eat a lot of fresh food. “The routine you build has to be something you can follow for the rest of your life.”

From 240 pounds, Gorrell is now down to about 185. And it’s not just his pant size that has changed.

He chooses to spend time and hang around with friends who share similar goals. They motivate and support each other, and go running to prepare for marathons together. In choosing a new apartment, Gorrell’s number one priority was location, location, location — it had to be near the parks where he meets his workout group. Even vacations are planned around his running schedule, something that has become a high priority in his life.

The Chicago Marathon is a major goal for Gorrell, as are several local half marathons he plans on running. He admits that it’s not the running he enjoys, but the competition — and knowing he has to run hard to join the race. “There are so many fitness options, and something is going to work for everyone out there. The trick is to find something that is fun for you so you will keep coming back.”

Gorrell puts a high value on the dynamic of his group, and the fact that they all care for each other. And as an instructor, he knows people are looking up to him as an example.

“It’s a good kind of pressure,” he says.