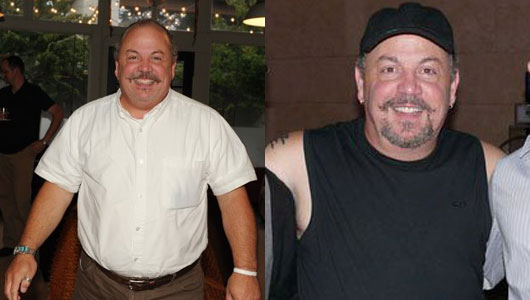 After losing 65 pounds, this Atlanta florist now feels as fit as a fiddle.

Larry Hammack doesn’t drink coffee when he wakes up.

That wasn’t always the case. In fact, up until a year ago, Hammack was carrying around an extra 65 pounds, and had little energy to do anything. The co-owner of a florist shop, his typical day consisted of four activities: working, feeding the dog, eating and sleeping.

“All I wanted to do was eat,” he said. “I would sneak into the cookie jar and eat oatmeal cookies with my breakfast.”

But last April, Hammack got the prodding he needed to lose the extra weight. A visit to the doctor delivered the news he was dreading: he weighed 276 pounds.

“I almost fell over when I saw that,” he said.

He also learned that in addition to high blood pressure, he had low testosterone, which is associated with obesity, depression and fatigue.

And the doctor discovered that Hammack had a hernia, which the extra weight had concealed.

Hammack quickly went to work on devising an exercise and diet plan that has trimmed more than 60 pounds off his frame. He took inspiration from several mainstream diets by immediately eliminating white sugar. He now stays away from anything with white flour and he eschews any kind of canned, boxed or processed food. Fresh fruits, grains, raw nuts, grilled chicken and whole wheat pasta are the mainstays of his diet.

He’s also attentive to how much he eats.

“Make a fist, and anything beyond that size, you don’t need to eat,” said Hammack, echoing a common theme of many popular diet programs.

Hammack said it’s easy to overeat at restaurants because you’re paying for the food and don’t want to waste any. But restaurants are notorious for offering super-sized portions, often of food that even in smaller quantities is ill-advised.

He estimates he consumed 5,000 to 6,000 calories a day before he went on the diet. Now his calorie-intake is far below the 2,000-calorie threshold.

As for exercise, it’s now one of Hammack’s favorite activities.

Just as he did nine months ago when his weight loss journey began, Hammack rises at 5:30 every morning to walk before heading to Foxgloves and Ivy, his flower shop.

When he began, he could barely walk a block. Now he walks about two miles every day, but he’s considering doubling the distance since he can cover four miles in the same time it once took him to cover two.

After work, he hits the gym. Hammack belongs to a small gym where he works closely with the owner, who is a personal trainer. He gets pumped up by synchronizing his treadmill work out to a playlist on his iPod music player. He also goes out dancing several times a week. Since losing the weight, he’s learned how to dance the country two-step.

“Find something to do in the evenings,” he said. “Get away from the TV.”

Hammack’s advice for others who want to lose weight? Get a complete physical to see if there’s a medical cause for the sudden weight gain. Low testosterone, one known culprit, is at epidemic levels for men, and low vitamin D concentration is also an issue.

With the excess weight gone, Hammack is looking forward to several reunions. A native of Macon, he’ll soon be attending a reunion of his Boy Scout troop.

“We keep planning these reunions, and the last time they saw me, I was an old, fat man. Now I really want to show them how I look,” he said.

That goes ditto for a reunion with his Air Force buddies. He will soon be seeing fellow vets who were stationed in Germany together two decades ago.

“I’m going to show them I’m in better shape now than 25 years ago,” Hammack said.

There’s no end to the activities he enjoys. But mainly he’s happy that he doesn’t have to say no to anything because of physical limitations.

“If friends say, ‘Let’s go on a biking trip in the mountains,’ I want to say ‘Great, let’s go,’ and just be ready for anything,” he said