Weight Loss Before and After: Joanna Slims Down 52 Pounds And Stops YoYo Dieting 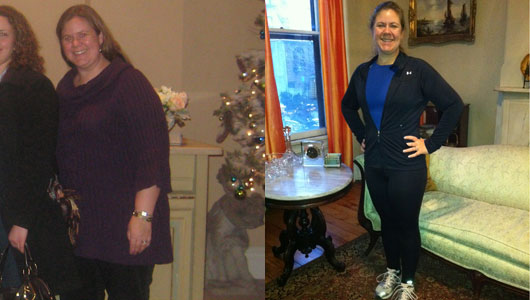 This New Jersey mom lost 52 pounds after yo-yo dieting for most of her life.

Looking at the photo albums of Joanna Weintraub’s two young children, no one would know their mother existed.

“I avoided [being in] pictures like the plague,” says Weintraub, a 36-year-old preschool assistant director from Hoboken, N.J., who lost 52 pounds.

Things started to change in March 2010, when, after yo-yo dieting most of her life, Weintraub started Weight Watchers’ online program. She weighed 224 pounds at the time.

With her hectic life, there was “no way was I ever making it to meetings,” Weintraub says. The online component gives her flexibility but keeps her on track, she adds.

Her lifelong challenge has been compulsive eating, she says. “Once I start eating, I literally cannot stop putting food in my mouth,” Weintraub explains. So to be successful, she realized she had to radically change her habits instead of gradually transitioning. That meant listening to her body and her own needs, and taking some risks, she says.

To set the tone, Weintraub does not eat breakfast because doing so would trigger her all-day snacking habit. “I had to acknowledge that in myself, that this is what my body does,” she says. Instead, she drinks water and might eat fruit in the morning — an unlimited food on Weight Watchers — and has her first meal around noon. She eats again around 3 p.m., and then has dinner around 5:30 or 6 p.m. “Then I’m done — I don’t do the hours of snacking [anymore].”

RELATED:   Weight Loss Before and After: Leigh Lost 183 Pounds By Giving Up Processed Foods

She also says that, for the first time ever, “I’ve gotten a little selfish.” That means not cooking dinner for her husband and children every night, and taking a half hour in the mornings to run while her husband gets the kids ready for school. “I’d never taken that time for myself,” Weintraub says.

That running time has turned into a new passion. Since starting a couch-to-5k training module online, Weintraub completed a 5K run in October. She now runs five miles two to three times per week, and is planning to do a 10K this year. When the weather is bad or she feels tired, she reminds herself of a friend’s comment: anything is “better than sitting on the couch eating peanuts.”

Though her weight-loss attempts have been unsuccessful in the past, Weintraub says last year may have been her time. “I’ve always quit after [losing] a couple of pounds,” she says, adding that she expected that to happen again. “At first I just said, ‘Let’s see how far I can go,’ and then when I got under 200 [pounds], I was like, ‘Holy cow.’ But this time, I was enjoying it because I was giving myself room to be selfish and not feel guilty all the time.”

She does not dwell on setbacks, a key to success in weight-loss, Weintraub says. “We women have to be good about saying, ‘So what? I ate a cinnamon roll,’ ” she says. “Just acknowledge it, record it and then move on. You can work on [improving] at the next meal. There’s no point in having incredible guilt over where you’ve been. Don’t give up because you’ve had a bad day.”

Reigning in her eating and running consistently has kept her fit and inspired. “It feels so good — it’s not feeling onerous,” Weintraub says. She has already lost her “pie in the sky” goal of 50 pounds, but she’s not done yet. “I think I’m going to keep going and see where I end up.”