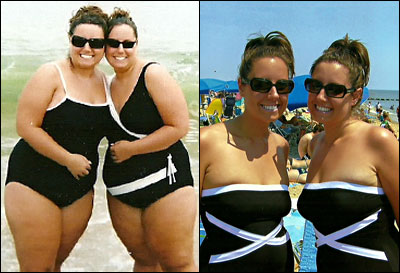 Growing up Amanda and Ashley Cygan did everything together. As adults their decision to lose weight—after discovering their health was on the line—was no exception

Twin sisters Amanda and Ashley Cygan, preschool teachers in Raleigh, NC, share more than DNA. They both struggled with weight throughout junior high and high school. At 18, they received bad news from their doctor: They were at risk for heart disease and stroke, both of which run in the family. Because of their age, the doctor recommended weight loss instead of medication, and the sisters took his advice seriously.

The Goal
Both women hoped to decrease their BMI and improve their cholesterol levels and overall health; Amanda wanted to lower her LDL (bad) level, while Ashley worked to raise her HDL (good) level.

The Problem
Their diet resembled that of the typical American college student—fast food, soda, processed foods (especially refined grains), and the occasional ice cream sundae. The lack of exercise coupled with excessive portions of unhealthy food pushed the sisters past 200 pounds.

The Solution
The twins started seeing Erin Palinski, RD, CPT, in 2006, when they were still living at home with their parents in New Jersey. For the first year, they met with Erin every 2 weeks, and she encouraged them to make simple swaps and try whole wheat breads and pastas, homemade pizzas, light ranch dressing, and diet soda. Ashley made an effort to eat more foods containing monounsaturated fats, such as avocados and olive oil, to boost her HDL levels.

Erin showed the sisters what a proper portion looks like and suggested they follow a 1,400- to 1,500-calorie diet. They tracked their meals based on the type of food they ate, for instance, starch, vegetable, fruit, protein, fat, or dairy. Their journals were nearly identical. Once they moved into their own apartment, they kept a joint food record because they carried the same snacks to school and cooked dinner together.

Amanda and Ashley decided to begin exercising after a few months of focusing on their eating habits. They started with walking. A year later, each had lost close to 60 pounds and added resistance exercises to tone their bodies. At the campus gym, they did triceps extensions, biceps curls, squats, crunches, and cardio.

After graduation, the sisters moved to North Carolina, where they live in separate apartments in the same complex and teach at the same school. They go to the gym together twice a day—before and after work—alternating weights, the elliptical, and the treadmill. Their commitment to improving their health has paid off. Between 2006 and 2010, Amanda’s LDL dropped to 129 from 148, and Ashley’s HDL rose to 63 from 39 (Healthy LDL levels for women should be above 50, and HDL level should fall below 130 in the absence of other medical issues.)

The twins don’t think they could have done this without their dietitian’s help. “Knowing that someone was going to weigh me was a big motivator to work hard. I didn’t want to disappoint myself or even Erin,” Amanda says. She and her sister still touch base with Erin and make appointments with her when they’re in New Jersey.

Erin says the twins are a great example of how to be successful with weight loss during big life transitions. Throughout their weight loss journey, they have moved out of their parents’ house, completed college, moved to a new state, and started full-time jobs. “They just roll with it,” Erin says. “For some people, one little thing throws them for a loop, and that’s never really happened with them.”

The Motivation
Each morning when Ashley’s phone alarm goes off at 5 a.m., she says she wants to throw it out the window. The vision of her rocking a bikini is the only thing keeping her phone in tact. Amanda works extra hard because she is preparing to walk down the aisle next year.

The Rewards
The Cygan sisters can now shop at stores like Hollister, American Eagle, and Delia’s—the clothing used to be too small for them.

Their Tips
It takes time. “Don’t give up. After you start seeing changes, you will feel like a new person.”—Ashley

Abandon the word ‘diet.’ “Call it a lifestyle change. People hear ‘diet’ and freak out—like I did. I tried every diet in the book. Just change the way you eat and watch your portions.”—Amanda