Men Before And After Weight: Elliot Sheds 140 Pounds After Wake Up Call 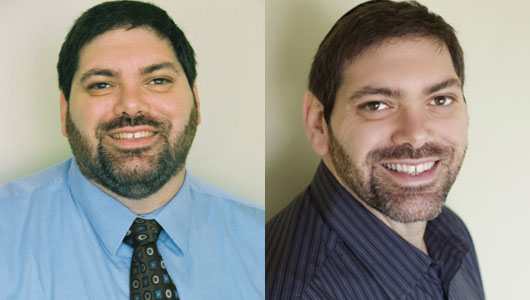 This 36-year-old Los Angeles resident dropped 140 pounds after he was denied life insurance.

The 36-year-old Los Angeles resident weighed 398 pounds at the time and because of his girth, the insurance company would not give him a policy.

“That was a big freakin’ wake-up call,” he said.

It turned into the catalyst Berlin needed to do something he’d been meaning to do for years: start losing weight.

Berlin, a chiropractor who specializes in prenatal and postpartum care, began his weight loss odyssey in February of 2010 and has lost 140 pounds so far.

In addition to not being able to buy life insurance, he said that the extra weight he was carrying around caused him to develop sleep apnea.

As a result, he slept very lightly at night and had trouble staying awake during the day. By 11 a.m., he felt like he needed a nap. He would drink 10 to 12 cans of soda a day just to keep up with the patients at his clinic. Every time he sat down, he wanted to fall asleep. He often had to pull over on the side of the road to catch a few minutes of sleep before proceeding with his commute. And, he said he would fall asleep on the toilet for an hour at a time.

RELATED:   Read on to learn how Adina turned her life around and dropped over 120 pounds!

“It was pathetic,” Berlin said.

Determined to make a change, Berlin started walking and dieting in February. He went from eating more than 5,000 calories per day of junk food with no exercise to eating about 1,800 calories per day of healthy meals and exercising. He also used shakes from Isagenix for meal substitutes and went on a special “cleanse” diet two days a week to spur further weight loss.

Once his weight dropped below 350 pounds, Berlin was able to start using a treadmill. He couldn’t before then because of the treadmill’s weight limit. He had a similar issue with the Wii Fit, which had a 320-pound weight limit.

Berlin said he aimed for 30 to 40 minutes of exercise, five days a week.

At one point, he began working with a personal trainer who helped him with core exercises, weight lifting and balance. He also increased his running and started playing basketball.

After he lost 90 pounds, he received an offer of 13 weeks of free personal training five days a week if he would be in an infomercial for a new home gym product called Total Flex.

Berlin accepted the offer and proceeded to lose another 40 pounds over that 13-week period.

“It was like boot camp five days a week, and I did cardio on the weekends,” he said.

RELATED:   Real Weight Loss Success Stories: Danielle Lost 78 Pounds To Be There For Her Kids

Since that time, Berlin has been enjoying his newfound fitness by trying lots of new activities: swimming, boxing, spinning, racquetball, cardio-kickboxing and hiking. He’s even taken a few hip-hop dance lessons.

As a side benefit, Berlin said he’s managed to reduce the number of medications he was taking from five down to one. He said he takes the lowest dose possible of the one prescription he’s still on but he expects to stop that soon.

Berlin said he took a lot of inspiration from the pregnant patients at his clinic. He saw them going through all sorts of incredible physical challenges from sciatic pain to nausea to forced bed rest. Despite the discomfort and unpleasantness, the pregnant women always pushed through the obstacles because of their love for their children.

Berlin, a father of four, recognized the parallel to his own situation and his need to overcome a physical challenge for the sake of his children.

It’s been about 10 months since he started, and Berlin notes that his weight loss success story has been as much about the journey as the outcome.

“It’s not just the result,” he said. “It‘s what you did to get to the result and that’s what is changing me forever.”