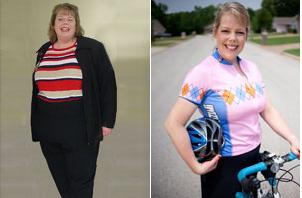 Find out how Deborah Taylor lost 170 pounds—and stopped hiding under layers of clothes.

In 1990, Deborah Taylor tipped the scale at 320 pounds and hid under big, baggy clothes—even in summer. The Texas native had packed on pounds after being sexually assaulted earlier that year.

“The extra weight had become a security blanket to keep men from being attracted to me,” Deborah, now 38, says. But one day, in 2006, she realized that by holding onto the protective weight she was “still playing a victim.”

Before
So Deborah took control. She put herself on a 1,500-calorie-a-day diet and lost 15 pounds. Then she hired a personal trainer. With literally half her body to lose, Deborah and her trainer put together a 1,200-calorie diet. Over the next nine months, she worked up to power-walking a half-marathon and competing in endurance-cycling events—her new love.

In one year, Deborah reached her goal of 150 pounds and a size 6. And she celebrated by shopping for a two-piece bathing suit for the first time. “It was an absolute blast,” she says. “I’ve actually got a bikini-ready body!” What’s more, Deborah adds, she’s at peace in her own skin: “I feel like the real Deb is back!”

Her gift
Raleigh Bicycles is giving Deborah a 2009 Raleigh Supercourse Road Bike ($1,740), so she can keep biking for a long time to come. Congrats!

Sweet tooth? No problem!
Deborah couldn’t give up dessert altogether. (Who would?!) So she swapped crazy-high-calorie treats for lighter options. Her favorite: South Beach Living Oatmeal Chocolate Chunk Cookies. “Each one is packed with chocolate chips, and they’re prepackaged by two so you’re not tempted to overdo it,” Deborah says.

RELATED:   I Lost 75 Pounds: Ramona Dropped The Weight When She Realized She Was Worth It

Try this motivating mantra
When faced with temptation, Deborah reminds herself “healthy people do not eat that” to help her stay on track. She found this tip and others in the book The Art of Possibility: Transforming Professional and Personal Life by Rosamund Stone Zander and Benjamin Zander.