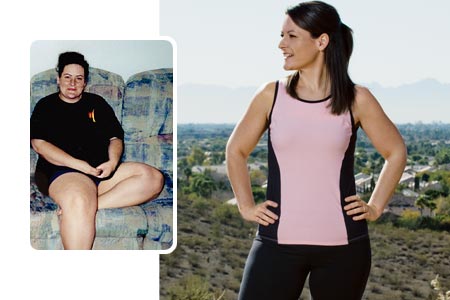 Postbaby pounds are hard to shake, and after having two kids, Stephanie Long had put on more than 100 of them.

“When I was pregnant, I gave myself permission to eat whatever I wanted,” she says. “I was often too tired to cook, so we’d go out and I’d supersize the burger and fries.” Problem was, she kept it up even as her baby girls turned into toddlers. Add in 10 sodas a day and eventually Stephanie, who is 5’7″, tipped the scale at 245. In 2004, she landed in the hospital when a ruptured uterus ended her third pregnancy—and almost her life. Afterward, she was put on medications for anxiety and depression. “They made me feel like a zombie,” she says.

Over the next two years, her weight rose to 264 pounds, she suffered headaches, and twice was rushed to the ER for what she thought was cardiac arrest. It was at the end of 2007 when she left her doctor’s office with a prescription for blood pressure pills that it hit her: “I was 28 with the body of a 50-year-old. I didn’t want to take pills for the rest of my life.”

RELATED:   I Lost Weight: Jennifer Bonner Wanted To Set A Positive Example For Her Daughter And Lost 187 Pounds

On New Year’s Day 2008, Stephanie made a fresh start. She and her husband, Chris, planned low-calorie meals and started alternating days of cardio and weight training. “We committed to overhauling everything at once so there was no ‘We’ll do it tomorrow’ mentality.” When she nixed soda, her headaches vanished. Soon, fresh fruit and veggies replaced packaged snacks. “Now my pantry is empty because we don’t eat much processed food,” she says.

Half a year later and 60 pounds lighter, Stephanie hit a plateau, so she decided to go vegetarian. “It’s easier to get more fiber from fruits and veggies when you’re not filling up on meat,” she says. High-intensity Spinning classes torched calories and stress, and helped her quit the meds in June 2008. “I wish someone had told me that if you exercise, your body gives you all the chemicals you need to feel better,” she says.

Since slimming down from a size 22 to a 6, Stephanie has improved her outlook along with her health. This past January, she was promoted at work. “I wouldn’t have had the confidence to go for it before,” she says. “But start moving and it’s amazing what you can do.”

Rise and exercise “For a while I slept in my workout clothes and moved the alarm clock across the room so I wouldn’t hit snooze.”

Swap out meat “I make veggie sloppy joes with soy crumbles instead of beef to slash the fat, and whole-grain rolls for extra fiber. My family loves them.”

Be sweet smart “For a lower-cal, high-fiber way to satisfy a craving, I stir pumpkin puree into devil’s food cake mix, pour it into a muffin pan, and bake.”