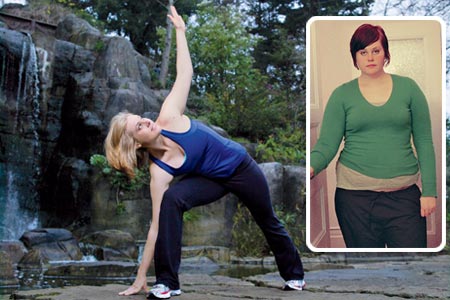 Losing weight was never a priority for Amber, until a friend’s wedding gave her the deadline she needed

At 27, Amber Carson Miller looks every bit the fun, fit San Franciscan she’d always hoped to be: a skinny-jeans-wearing city girl with a slim waist and the toned body of a cyclist. But, boy, did she earn that body.

By the time Amber left theCaliforniaCollegeof the Arts, a graphic design school, in 2004, stress eating had taken her from a size 12 to a 16. Doubling up on fast-food breakfasts while commuting to her desk job as an IT specialist piled more pounds onto her 5’10” frame. Soon, her scale’s needle was nearing the 250 mark. Still, losing weight was never a priority. Then, in August 2007, when Amber was about to board a small plane en route toAlaska, the pilot weighed her. “When I saw him write down that number—247—and then I had to sit up front, where everyone knows the heaviest things go, I was mortified,” she says. Instead of enjoying her vacation, she sank into a serious funk, and when she returned home, insecurity and depression led her to break up with her boyfriend, Josh.

RELATED:   Male Before And After Weight Loss: Anthony Falls In Love With Running And Loses 105 Pounds

The following summer, when Amber agreed to be a bridesmaid in a friend’s August 2009 wedding, the event became her weight-loss finish line. “I didn’t want to see the wedding photos and think about how heavy I looked. I wanted to remember it as an awesome day.” She hired a personal trainer. “First, we worked on my core because I hadn’t worked out in eight years!” Plank poses strengthened her middle before she moved on to 20-minute cardio sessions, alternated with free weights.

Two months later, Amber had lost only 10 pounds, so she consulted a nutritionist. When a food diary revealed that she was eating mostly high-calorie carbs—pastries for breakfast, pizza for lunch, cookies and chips—she began to vary her diet, making sure each meal was roughly 40 percent protein, 30 percent healthy fats, and 30 percent whole grains. Her hunger faded and the number on the scale took a nosedive.

“I lost 15 pounds in two weeks!” Amber says. And she regained her boyfriend. “I didn’t want my weight to decide who I dated,” she says. She even began joining Josh on 30-to 50-mile daily bike rides. A month before her friend’s wedding, Amber slid into size-12 jeans. “I knew then that the lunges and squats had paid off,” she says. She not only made a slim bridesmaid but also dropped two more sizes afterward to reach a size 8. Now Amber is confident about the future. “I thought I was stuck,” she says. “Now that I’ve lost the weight, I can keep going and do anything.”

RELATED:   Weight Loss Before and After: Carlene Lost 24 Percent Body Fat And 43 Pounds

Gear up “I use a Polar F6 heart rate monitor during workouts. It keeps me on top of my intensity so I know when I’m burning the most calories.”

Get sucked in “I watch my favorite trashy TV shows at the gym; they keep me going on the treadmill.”

Drink wisely “At the bar, I’ll trade a few beers or a sugary mixed drink for a serving of whiskey that I sip. I still have fun, but with way fewer calories.”

Related Itemstreadmill
← Previous Story Weight Loss Before and After: Kelly Shed 100 Pounds To End Family Obesity Trend
Next Story → Barbara Eckonen lost 45 lbs! Read on to learn how she did it!