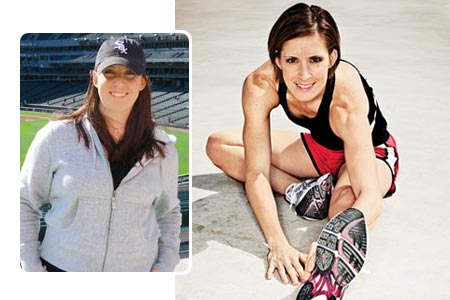 For years, being active offset 27-year-old Julie Przybyla’s high-fat diet. But the former high school cheerleader fromSacramento,California, fell off the fitness wagon when she enteredPurdueUniversity’s graduate program for pharmacology in the fall of 2005. Time-crunched, she relied on convenience foods like frozen pizza. “I never cooked for myself, and I didn’t exercise for almost two years,” she says. As Julie’s course load became heavier, so did her body. Soon, she’d packed 50 pounds onto her 5’9″ frame.

In April 2007, Julie was devastated when she had to buy size-18 pants. Stepping onto the scale for the first time in six months and seeing it flash 205 was the last straw. “I was in denial until I saw that number,” says Julie. “I realized I really had to make a change.”

That night, Julie made her first home-cooked meal in two years: chicken tacos. The healthy recipe was so easy and tasty that she immediately decided to go cold turkey on takeout and microwave meals. In one week, she dropped four pounds. “Seeing results made me want to push myself,” she says. So Julie began logging an hour of cardio a day and dropped a dress size in one month. Then she started running and began competing in races. Within a year, she completed her first half marathon, placing fifth in her age-group. And in November 2008, she recorded another personal best when she weighed in at 140 pounds.

Now a happy, healthy size 6, Julie recently qualified for the Boston Marathon. “Two years ago, I never dreamed that I could be a runner,” she says. “It shows what you can do when you set your mind to it.”

RELATED:   Weight Loss Before and After: Laurel Drops 125 Pounds By Taking Baby Steps

Eat in. “When you cook, you control everything that goes into your food and your body.”

Get a move on. “Find an activity you enjoy and are good at so that it doesn’t feel like work to do it. You’ll stick with it.”

Halve the battle. “When I do eat out, I ask my server to put half of my meal in a takeout box before I even get it. It sounds weird, but I never overeat anymore.”

Catch up on all of our weight loss success stories!

Related Itemsrunning
← Previous Story “I Weighed More Than Him.” Cyndy Lost 50 Pounds!
Next Story → Weight Loss Before and After: Peg Cuts 73 Pounds And Relieves Menopause Symptoms By Jogging at Home