From PCOS Struggle To PCOS Success – A Journey Of Infertility 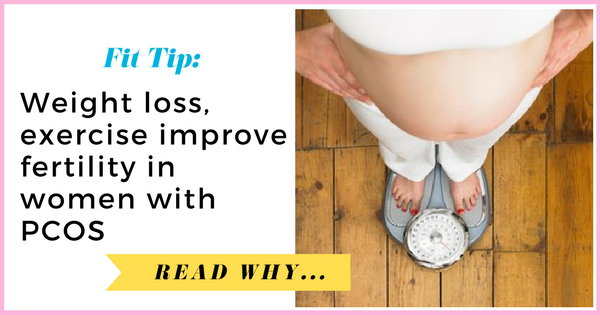 Washington, DC–Weight loss and exercise improve ovulation in women who have polycystic ovary syndrome, a common hormone disorder that often causes infertility, according to a new study published in the Endocrine Society’s Journal of Clinical Endocrinology & Metabolism.

Polycystic ovary syndrome (PCOS) is the most common cause of female infertility. The condition occurs when a woman’s body produces slightly higher than normal amounts of testosterone and other androgens, sex hormones associated with male traits. The resulting hormone imbalance can cause irregular or absent menstrual periods, weight gain, acne, excess hair on the face and body, or thinning hair on the scalp. As many as 5 million women nationwide have PCOS, according to the U.S. Department of Health and Human Services’ Office of Women’s Health.

“The findings confirm what we have long suspected – that exercise and a healthy diet can improve fertility in women who have PCOS,” said one of the study’s authors, Richard S. Legro, MD, Vice Chair of Research and Professor of Obstetrics and Gynecology and Public Health Sciences at Penn State College of Medicine. “Making preconception lifestyle changes is beneficial, either alone or in combination with other pretreatment options.”

Women with PCOS often take birth control pills to regulate the menstrual cycle and reduce the level of androgens in the body. Past research has indicated that pretreatment with a short-term course of birth control pills can raise pregnancy rates among women with PCOS. The JCEM study was designed to compare preconception interventions and their impact on fertility.

The randomized open label study examined the differences in pregnancy outcomes among 149 women with PCOS who either took birth control pills, underwent lifestyle modification or a combination of the two interventions for a four-month period. The participants were between the ages of 18 and 40. The women were either overweight or obese, but had no other major medical conditions. After the intervention, the participants underwent four cycles of ovulation induced by medication.

RELATED:   Weight Loss Before and After: Liz Drops 72 Pounds And Wears The Clothes She Loves

“The research indicates preconception weight loss and exercise improve women’s reproductive and metabolic health,” Legro said. “In contrast, using oral contraceptives alone may worsen the metabolic profile without improving ovulation. Lifestyle change is an important part of any fertility treatment approach for women with PCOS who are overweight or obese.”