Home » We Lost Weight for Love 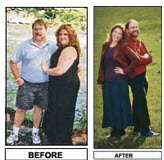 Caryn and Paul Wells vowed to drop 140 pounds for their wedding day.

Moment she knew she was a weight loss success: I always had to wear flat, frumpy shoes, and I’d still come home with aching feet, so I really felt victorious the day I could fit ballerinas for 14 hours while wearing a pair of 3-inch Kenzie heels.

Moment he knew he was a weight loss success: Not hearing myself let out a grunt when I knelt to grab a prop.

It’s 2 minutes before the curtain rises on the American Ballet Theatre production ofSwanLakeat theCityCenterinNew York. Caryn Wells, an ABT associate wardrobe supervisor, rushes out to give the Swan Queen a new toe shoe and makes it backstage in the nick of time. She and her husband, Paul, the prop master, share a private smile as he heaves the maypole into place.

Two years ago, that 50-yard dash would have left Caryn winded through the first dance, and Paul would’ve moved so slowly that the curtain might have caught his 268-pound body in midsquat. Since then, the couple has lost more than 140 pounds between them, and maintained it without completely giving up what brought them together–a shared love of rich food.

When Caryn and Paul first met, on assignment inJapanin 1992, Caryn was at her all-time low weight of 138. Paul was a “175-pound smart-ass with a martini-dry wit,” says Caryn. “That’s what I liked about him.” Four years later they met again as full-time ABT employees inNew York. For 2 years they were colleagues and flirty friends. They kept up a running battle of one-liners “trying to prove who was smarter,” says Paul.

In 1999, while commiserating for the umpteenth time about dating, Paul decided he couldn’t resist her “eyes that changed from blue to green to aquamarine, depending on her mood.” Although still hesitant to take the leap, the two decided to give dating a try, and soon they became inseparable.

Eating out became their preferred courtship ritual–especially when traveling with the company 18 weeks of the year. “We’d met each other’s perfect partner for overindulgence,” says Paul. Together they lived magnanimously off the fat of their daily expense accounts: foie gras inParis; empanadas inBuenos Aires; toro inTokyo. At home, their tastes were less glamorous but equally fattening. “Ordering pizza meant, ‘Okay, I’ll get a large pepperoni–what do you want?'” he says. Or, after a show, they’d adjourn with the crew to a local late-night eatery for steak frites.

Getting Married, Getting Slim

They decided that if they were to wed in style, the extra pounds would have to go. The goal: Each would lose 70 pounds before they pledged their troth. Both were disinclined to exercise but thought it would be easier to work out than give up the foods they relished. Caryn had been eyeing the Curves that had just opened in their Gramercy Park neighborhood, and she liked what she saw–no buff girls and no hip-hop classes–so she signed up and did the gym’s signature 30-minute circuit-training three times a week. Paul renewed his long-lapsed membership to Bally’s. “I figured if she could manage it, then so could I.”

As difficult as it was to commit to weight loss by going to the gym, dieting seemed even more ambitious. “We’re foodies,” says Caryn. “We don’t do fat-free.” The truth was, as a lifelong yo-yo dieter, she had already tried. She’d attended some Weight Watchers meetings through the years but never really embraced the program. This time, with Paul as her weight loss partner, she re-upped and steeled herself to the ultimate challenge: how to make the Weight Watchers points system work for them and still live like gourmands.

Two Heads Are Better Than One

“As long as we don’t have to eat frozen dinners, I’m in,” Paul told her. Turns out, weight loss didn’t have to mean an endless parade of tasteless food. “We knew we could still eat what we liked if we could just limit our tendency to overindulge,” says Caryn. Strategy number one was to give their bistro habit a break and, instead, frequent a local supermarket with great fresh produce, so they could prepare healthy, yet tasty, French fare at home. They broiled halibut topped with a drizzle of extra virgin olive oil and lemon pepper and prepared salmon in an orange sauce. “We savored every bite,” says Caryn. They also began packing lunches to eat together at work: ham and Swiss on rye, or a salad made of lettuce, cucumbers, and a single flavor-rich ounce of goat cheese or Roquefort. And they put away Caryn’s breadmaker–except for holidays–to keep their calories in check at home.

For Paul, their weight loss diet was an immediate success: He lost 10 pounds in the first 2 weeks. “I only lost 2,” says Caryn, “and I was terrified that I was going to stay fat while Paul’s weight flew off.” Their dieting journals even showed she’d been doing everything he had. Paul told Caryn that the fact that he could lose proved their diet worked. “Just hearing that really gave me hope,” she says. Several times Caryn hit a plateau while he kept losing, but Paul’s constant support kept her focused on her goal. “I’d really want to give in and bake a loaf of French bread, and he’d say, ‘No, look how far you’ve come!’ ”

Throughout it all, the one thing they refused to give up was five-star dining. “A fabulous meal can be operatic,” says Caryn. Adds Paul: “There was no way we could abandon all our favorite haunts.” Their solution was to build those dinners around one decadent entrée like boeuf bourguignonne, which they’d split, and then add two healthy starters, like frisée salad and asparagus soup. “No dessert, unfortunately,” says Paul, “but you can’t have everything.”

Love Fills Them Up

There were hungry nights, “especially when we splurged on fries and chocolate cake at lunch and then had to make do with carrots and celery for dinner,” remembers Paul. “Sometimes I’d start to reach for the peanut butter.” But as they cuddled up to each other and their three cats, sipping one glass of Châteauneuf du Pape between them, Caryn reminded him why they were doing it: “For us.” “I hear you,” he’d say.

In September 2004, 1 year after they started dieting, they’d each lost 70 pounds, plus a few. On their wedding day, Paul stood atop a hill inWolfeboro,NH, proud to be in a slim-fitting suit. He smiled knowingly as Caryn walked toward him in the off-the-shoulder silk gown she had designed for own wedding day. He knew what she was thinking: Together, through hard work and willpower, they’d made childhood dreams–and grown-up hopes–come true.