Men Before And After Weight Loss: Trey Loses 110 Pounds And Becomes An Inspiration To Others 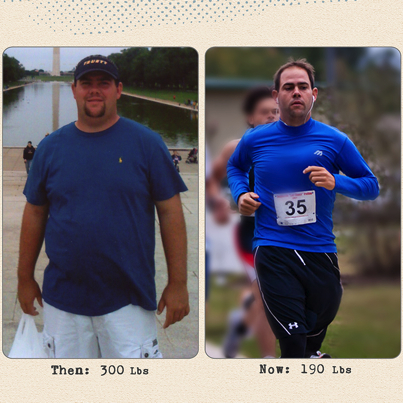 A college baseball coach, Trey Fowler had a lifestyle that made his weight problem come as a surprise. But he was on the road so often recruiting high school players that he turned to fast food, a routine that ultimately led him to pack on pounds. Today, he’s 110 pounds lighter, again an inspiration to the players he coaches, and is training for his first triathlon.

THE TURNING POINT: I can remember going to Six Flags about a year before I started trying to lose the weight. I was too heavy to ride the rides, too big to fit in some of the rides. When I was too heavy to skydive, that was my point at which I needed to make some changes.

THE PLAN: I just a little bit better choices. I’ve taken a lot in consideration into calories. So now it’s a lot more grilled chicken, a lot more grilled steak. I stay away from cheeses and the condiments that really rack everything up.

RELATED:   How I Lost Weight: I Lost 20 Pounds And I Feel Great!

THE ROAD TO SUCCESS: The one thing that I really learned early on was that I had to do things that I enjoyed. I couldn’t force myself to do things. So I started out initially with a lot of playing basketball which I enjoyed and swimming which I also enjoyed. Now, that’s transitioned into a lot of running which I never thought I’d do again. I’m training for my first triathlon. I’m having a little bit of the difficult time with the biking part but it’s exciting to be doing stuff I’ve never done before. I just wanted a next challenge, a next challenge. All along the process I’ve tried to challenge myself and shake things up from a fitness standpoint because once you do the same thing over and over again it gets monotonous and your results might taper off.

THE REWARDS: The things that I am able to do now, running with my players or practice, pushing them to push themselves, that was stuff I never dreamed I could possibly ever do before. And obviously not being able to fit on rides and being too heavy to do stuff that was limiting and those were things that really my weight kept me from doing.

WORDS OF WISDOM: Do it for yourself. I think that’s the biggest thing that I had to learn. I tried to lose weight before because I was scared that I was getting too heavy. The doctors said that I might need to lose weight or a coach told me I was too heavy, but until that point hit, that point where I finally said enough is enough, I needed to have a more direction.

TOOLS OF MY SUCCESS: Apps including the My Calories app that allows tracking of caloric intake. A food scale to track portion size. A varied workout program to keep from becoming bored.