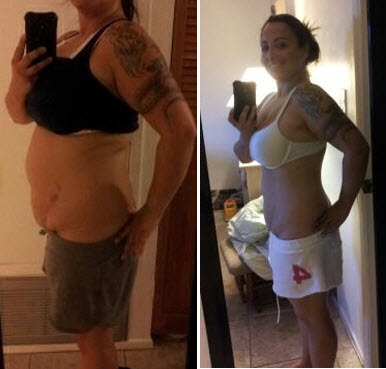 I have been into fitness for about 15 years. When I was 27 I got pregnant with my son and gained over 60 lbs. I thought for sure I was doomed because we all know that our metabolism slowed as we age, right? It was taking me a long time to lose the weight. I was doing crazy fad diets to lose the weight (HCG) and it would work but not last. I then got pregnant with my daughter (age 34) and was worried about the weight gain, then an even bigger blow. My boyfriend left me. If that wasn’t bad enough, he told me that he could tell that I was doing nothing but “laying around” because I was gaining weight. MInd you, I was five months pregnant. I was worried about my weight the whole pregnancy. I gained 40 lbs total which is in the normal range. After having my daughter, all I could think about was getting skinny again. For some dumb reason, I wanted him back. I had many late nights with a newborn and caught some infomercials. I bought Insanity because it looked hard and the people’s results were amazing. I got it and started working out and QUIT!! I quit because my mindset was wrong. Months later I started it again but this time it was for me. I did it because I was so uncomfortable in my skin that when I had to get up in front of the class to do presentations, I would have such horrible anxiety that I would shake for the next hour and a half. I was tired all of the time and had no energy for anything! I had also gotten the family pictures back that had been taken. I did NOT like what I saw. So it was time. I started the program and changed my diet. I could not change it too much because I was breast feeding. I made sure to eat 5-6 times a day and did my workouts six days a week. In two weeks I saw a difference. I would take pictures and take measurements to track my progress because sometimes the scale is our enemy. I sent my 1 month photos to my sister and she text back “shut up!” That response made me feel so good because my results were so dramatic, it was unbelievable. Not too unbelievable though because I was living proof! My life now is completely different. I am not finished by any means, I am still a work in progress. The Insanity program really has changed my life, there seems to be more hours in the day now. I am able to do ALL of my daily duties, which means my house stays clean!! House work was one of the things that would get set on the back burner. The last month of school when I had to go up in front of my class, I no longer was near an anxiety attack. I am getting looks again from the opposite sex(which always feels good to be attractive) and I ran my first 5k. I never thought in a million years that I would do any kind of running event! I am a single mom of two and a full time pre-med student! If I can do it, anyone can do it. If I help just ONE person with my story, it makes any of the pain I went through getting here worth while.