Male Before And After Weight Loss: Tony Lost 102 Pounds And Saved His Own Life 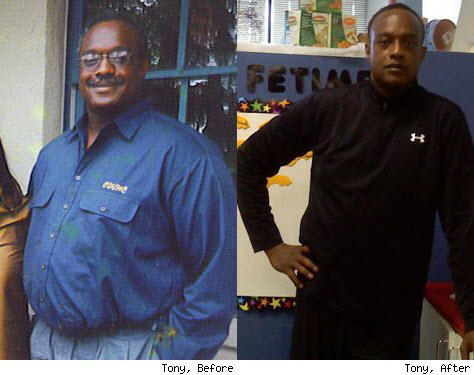 Tony Saved His Own Life by Losing Over 100 Pounds

How I Gained It: Over the last 15 years, I gained weight from just eating the wrong foods, too much of them and at bad times. In July 2008, my weight was 330 pounds. I was on five different medications for high blood pressure. One caused edema (swelling of the legs). Another caused fatigue and slowed down my heart rate. The medication also caused very painful gout attacks two different times. Because of my high blood pressure, I had heart failure and moderate heart damage.

On a cruise, I tore my Achilles tendon, so I couldn’t work out, which I was not doing anyway and, as a result, put on more weight. My blood pressure went further up. In February 2009, after a disagreement of sorts, I didn’t feel good. Something was very, very wrong. I had my blood pressure checked at a fire station — it was 260/150. They almost took me to the hospital. I was 354 pounds with a waist at 46. My shirts were 3XL.

I was eating at McDonald’s, Burger King, Wendy’s, KFC — and I never met a rack of ribs I didn’t like. I ate pizza by the pie. Every meal was “value sized” with a dessert.

Breaking point: I had heart damage, very painful gout and very high blood pressure because of my weight, which was out of control. It was a choice of life or death. There was no middle ground. I was going to lose the weight and live better or I was going to be on medication with maybe five years to live. I was a 46-year-old man in a 76-year-old’s body. I could not walk one-seventh of a mile or walk up a flight of stairs without catching my breath. I was tired of going to big and tall stores to shop. I wanted to live.

How I lost it: On May 17, 2009, I joined Weight Watchers. After the first week, I lost 16.6 pounds. I had ups and a few downs, but there were more up than downs so that told me that I could do this and make my goal.

In August of 2009, while still on medication and not working out, I went back to the same fire station and had my blood pressure checked again. It was 111/50. By the end of that month, I was off the high blood pressure medication and weighed 290 pounds. In September, I started to go to Bally’s Health Club to work out with the bike and weights.

RELATED:   How I Lost 60 Pounds: Mike Goes From Fat To Fab

What I had to do was to rethink food. Food is fuel, plain and simple. That meant no more McDonald’s, Burger King, Wendy’s or rib joints. I now choose salads, I don’t eat late at night and I eat smaller portions. I don’t eat carbs or starches, and no more whole steak at one meal. I only drink sweet tea every now and then.

Funny enough, I went shopping in my closet to find clothes I can wear. It’s a trip putting on suits and shirts that you used to wear and finding they now fit better. I had purchased two suits in March 2009. I wore them about five times each and now they are so big, I can’t get them tailored in because there is too much material!

Tony reached his current weight on January 3rd, 2010 and is participating in the Five Boro Bike Race in NYC in May.

Tony is not the only one who’s taken up biking — Stephen re-discovered his love of the activity after losing 38 pounds.

Related Items100 Pounds LostOver 100 Pounds LostrunningSEOweight watchers
← Previous Story Men Before And After Weight Loss: Mike Lost 127 Pounds With A Lifestyle Change
Next Story → How I Lost 230 Pounds: Blair Sheds The Weight With The Help Of Facebook