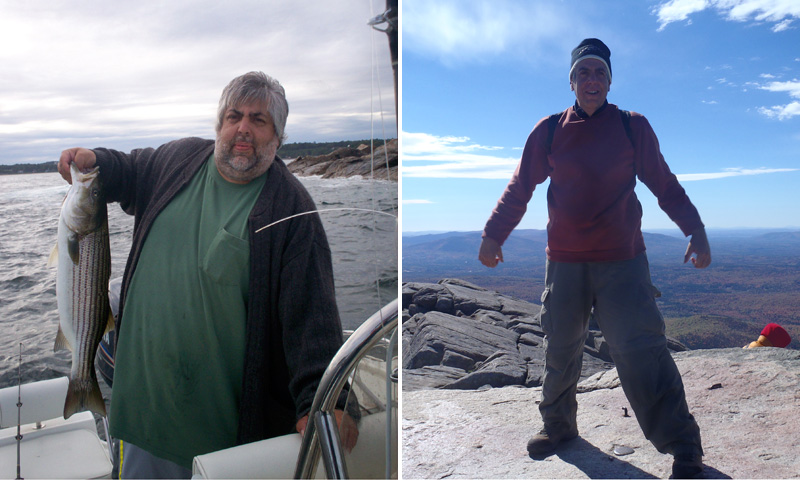 How I Gained It: I spent a lot of years overweight, depressed and just existing in my miserable self. For many years I was 100 to 150 pounds overweight, and I was okay with it. But then I ballooned by another 100 pounds or so and that really messed with me. It was harder to move, I wasn’t sleeping well, my sleep apnea scared my wife terribly and I was snappy and irritable. But that didn’t stop me from binge eating every night. I was eating all the wrong food, and all I could of it.

Breaking Point: I felt hopeless in so many areas of my life. No matter how hard I tried, I thought I was doomed to obesity and failure. There were not many things I had the energy to do, just work, eat, couch. I knew there was more, but I was too scared to change. I couldn’t reach my ankles without breathing so heavily it would wake my wife. She and my mother recommended I see a doctor. I thought a doctor could give me a quick fix. The doctor told me I bottomed out her scale, my blood pressure was through the roof, my cholesterol was sky-high and I was borderline needing medication for diabetes. She gave me prescriptions for my cholesterol and blood pressure, as well as a blood pressure pill to take right then because she was worried I would have a stroke on my way home.

She also gave me the card for a gastro surgeon, and I made an appointment for a few weeks away. But when I imagined my small wife having to take care of this big guy, I made an honest decision to try for the first time in my life to avoid the surgery.

What makes a man with no real physical limitations let himself get to almost 500 pounds? I concluded it was the need for instant gratification along with an unwillingness — a laziness you could say — to break these bad habits. I knew I had to make good habits my priority in life.

How I Lost It: I started walking my short street. It was tough, but I progressed. It got icy, so I joined the local YMCA so I could use the treadmill. I couldn’t walk five minutes without needing to rest, but I committed to 20 minutes, three times a week. I tried walking in the pool with weights on and found I could go 20 minutes without needing a break. I was feeling better after a month, so I figured I’d try an aerobics class. My wife came with me, and as we walked out of the locker room, all I saw were 30 65-year-old women. This 500-pound macho man made what I now consider to be one of the best decisions of my life: I accepted that this is where I needed to be.

After the class, a man in the locker room mentioned that he lost 60 pounds with TOPS. [Editors’ note: TOPS is a non-profit weight loss organization that stands for Taking Off Pounds Sensibly. A 2010 study found that participants who stick with the program over time keep the weight off — and don’t shell out as much money in the process as dieters using other plans.] He said it was like Weight Watchers, but while there is a recommended food exchange system, TOPS makes room for different people’s needs. You’re accountable for a weigh-in every week.

I went to my first TOPS meeting that week. I heard the story of a man who lost 132 pounds. He told me I would lose weight with the support of the TOPS members too, and I believed him. I came back the next week to join, weighing in at 457 pounds. I had to accept that I had to feel worthy of people’s help and generosity of spirit. I had to open up.

I didn’t deprive myself — quite the contrary! I committed to eating nothing but real foods. I stay away from all convenience foods — even protein bars or so-called diet snacks — anything claiming to be low in fat or carbs. I also drink zero calories per day. If it has an ingredient label, I try not to eat it. I take the time to eat a good breakfast, like high-fiber cereal, oatmeal or eggs. My snacks became cheese, peanut butter, olives, hummus, steak, chicken — real food. But I had to prepare and take the time to have these foods available — if I was unprepared I would find myself at McDonald’s. I had to learn a salad can be good without being drenched in dressing.

Today, I take zero medications, I’ve had no surgeries and I still go to TOPS every week. I find the strength in TOPS to be its members freely sharing their obstacles, struggles, knowledge and success. This gives us all perspective that it is not hopeless, and it can be done. I go to my meetings and participate; I now talk about things that in the past I would hold in. The people inspire me to be a better person. I’ve said it before and I’ll say it again: TOPS has given me the faith I needed to move a mountain. Today, I can climb ’em.