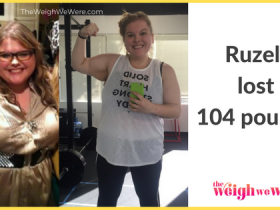 104 Pounds Lost: Ruzele Drops The Weight With A Plant Based Diet

While not a slim teen, Michelle kept her weight down by playing on her school’s soccer team. But in college, she quit exercising, developed a late-night pizza and soda habit, and piled on the pounds. She tried lots of fad diets but none worked, and she weighed 185 by graduation.

Diet Tip: My Over Indulgence

After college Michelle moved toEnglandfor two years. She didn’t like the food too much, so she naturally ate less—and returned home 20 pounds lighter. But within four months, Michelle had gained back the weight she’d lost and more, hitting almost 200 pounds. “I indulged in all the food I’d missed, like poutine [a Canadian dish of fries, cheese, and gravy],” she says. Hating the direction her life was going, Michelle made a decision. “I didn’t have a job or a boyfriend, I still lived with my parents, and I felt fat,” she says. “The only thing I could start changing immediately was my weight.”

When it came to food, Michelle had no willpower. “Fast food and baked goods were my biggest weaknesses, so I cut both out completely,” she says. She also made smart substitutions. Instead of having pancakes and bacon for breakfast, she switched to oatmeal; for lunch she ate turkey sandwiches in lieu of greasy burgers; and she traded pastries for smoothies. At the same time, Michelle joined the same gym her parents went to. “My first day there, I could barely walk half a mile, but I just pushed myself to go a little longer and a little faster every session,” she says. Steadily, she began losing weight, dropping about 35 pounds in six months. Eager to look more toned, Michelle started lifting weights, and after two months, she shed 11 more pounds.

Michelle sometimes worries that, just like in the past, she won’t be able to keep the pounds off. But she takes comfort in all that she’s learned. “I am done with crash diets. Even if my weight does creep up, I’ll have a sane, healthy strategy to lose it again,” she says. “Since that low point two years ago, I’ve also gotten a great job and moved into my own place. Now I’m living the life I want to live—and that feeling is sweeter than all the cake in the world.”

1. Find little ways to cut back “If I’m craving full-fat cheese on a sandwich, I ask the deli counter to slice it really thin. I still get the taste but with fewer calories.”

2. Plan your daily bites “Every morning I decide exactly what I’m going to eat and when. Having a schedule makes it easier to avoid grabbing extra snacks or treats.”

3. Broaden your exercise horizons “My mom takes a dance class, but I didn’t consider it a ‘real’ workout. Then I tried it. It was so intense that now I do it every week.”