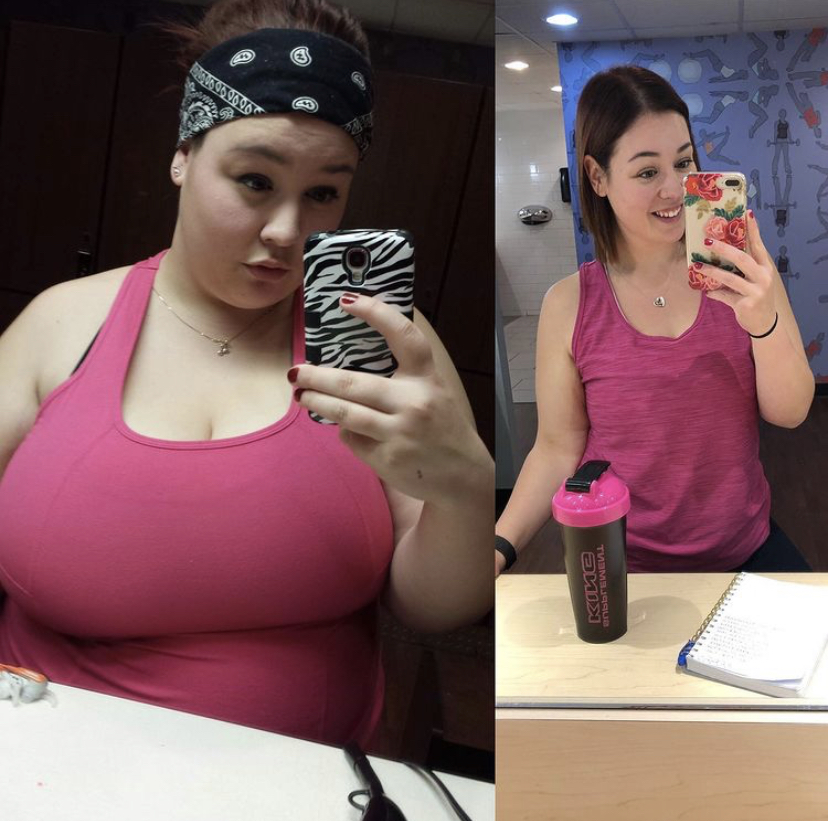 I have always struggled with weight issues. I grew up watching my mother struggle with her self hatred and weight issues. At the age of 10 I was sexually abused and as a result of this I hated my body. It was then that my struggle with my weight turned into full out hatred and disrespect for my body. Being abused made me care little for myself and I wanted to be as unseen as possible.

HOW DID YOUR WEIGHT AFFECT ANY ASPECT(S) OF YOUR LIFE? It got to the point where I felt there was no return. I wasn’t going as unseen as I had hoped for, in fact, people started “noticing” me a lot more. Many negative comments had me starting to really see myself. I was 14 when I went on my first diet. I would not eat for a few days and then I would binge eat for days. This is where my eating disorder began. This back and forth continued well into the beginning of my university years. I would hide away in my dorm and eat the “all you could eat” style cafeteria food. I remember waiting until late at night to use the common showers because I did not want others to see what I looked like in a towel. 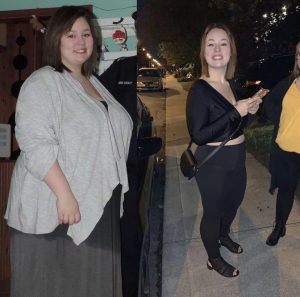 WHAT WAS THE “TURNING POINT” THAT GOT YOU STARTED ON YOUR WEIGHT LOSS JOURNEY? My roommate convinced me to get a gym membership and attend with her as she too was currently on her weight loss journey. We would stay constant for a week or maybe two but I was still so unable to control my eating disorder. It was not until I experienced my first miscarriage that my eyes truly opened to the harm I was doing to my body. At this point I had lost 40lbs but the doctor was still convinced that due to my obese weight and poor health, I would likely never carry a child to term. That miscarriage opened my eyes. I had always wanted to be a mother and the thought that I had let my abuser “win” and take away all happiness from my life was something I was not willing to live with. I started taking steps to living a healthier lifestyle for myself and in hopes that I would be able to conceive.

HOW DID YOU GET STARTED? I began by making it a routine to exercise 5x a week, limit restricting myself to try and bypass a binge and stocking my home with multiple healthier alternatives that I actually enjoyed. 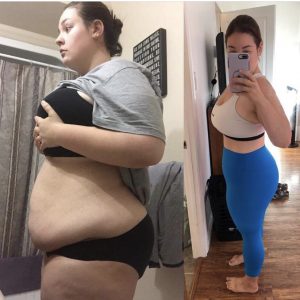 HOW LONG AFTER YOU STARTED DID YOU BEGIN TO SEE RESULTS OF YOUR WEIGHT LOSS EFFORTS? Initially the weight began coming off so quickly. It’s like my body had gone into shock from the change in eating habits. It was no longer being loaded with mass amounts of fatty foods and little to no nutrients.

WHAT WAS THE HARDEST PART? After I had lost my first 60lbs that I was able to lose, I got pregnant with my first son. Since I was still overweight and due to the previous miscarriage, I was deemed high risk. Obviously this meant restrictions on my exercising- not to mention pregnancy aversions and cravings. I was told that my pregnancy would likely not make it to term and due to my weight my risk of still birth was significantly higher. I was determined, even though restricted, to continue to keep on this journey and be the healthiest possible to nourish this baby and be my best self for him as he grows.

DID YOU EVER WANT TO GIVE UP? WHAT KEPT YOU GOING? I still have days where I just want to bury my hardships in a cheesecake or a pizza but after three miscarriages, my health choices have made it possible for me to bring two healthy boys into this world. My children give me a reason every single day to wake up and set an example for them. An example to nourish our bodies, move our bodies and care for them out of love- not hatred. 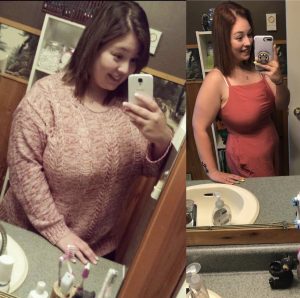 DID YOU HIT ANY WEIGHT LOSS PLATEAUS? HOW DID YOU OVERCOME THEM? Plateaus are something that everyone struggles with and in the beginning, they would cause me to get extremely discouraged and binge eat. It wasn’t until my pregnancy where I continued to move forward regardless of the weight that I realized that the more I often I step back due to discontentment, the longer it’s going to take me to reach my goals.

HOW LONG DID IT TAKE YOU TO LOSE MOST OF THE WEIGHT? The majority of my weight came off within a year. From, 270-200 it was a years worth of work to lose that weight. Initially I had made it to 240, but then after my first pregnancy, I had gained another 30lbs back.

DID YOU HAVE ANY NON-SCALE VICTORIES? Non scale victories have become the best part of this journey and honestly, there’s too many to name. Being able to walk up a flight of stairs or play tag with my three year old without gasping for air is my favourite. There isn’t any more fear of trying something new because I am unsure if my weight will cause me to be unable to do something or become embarrassed due to lack of breathe or extreme sweating. I coached my sons damn soccer team, and I AM SO PROUD of that. 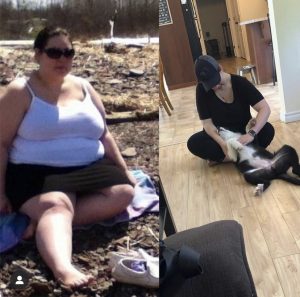 WHAT DOES YOUR DAILY DIET LOOK LIKE COMPARED TO WHEN YOU WERE HEAVIER? I had gone from eating whatever I wanted, whenever I wanted, and in whatever volume I wanted to actually educating myself on macro and micro nutrients.

HOW DOES YOUR PHYSICAL ACTIVITY COMPARE TO WHEN YOU WERE HEAVIER? Working out was the one struggle at first. Yes it was hard and tolling on my body but the biggest issue I had was a fear of the gym. I fear of not belonging, of being starred at or judged. It didn’t take long for me to realize that everyone in there had their own starting point and they were all there to work on themselves, no paying any attention to anyone around them. I met some people, we would go together at the same time daily and I learned things. I began to replace unhealthy coping mechanisms with a good sweat and I loved it. In the beginning I did cardio for hours but it is when I began to enter the realm of weight lifting that my passion for exercise started to flourish.

HOW DID YOUR EATING HABITS CHANGE? I began meal prepping my lunches every single day and tracking my caloric intake and macros. This was just a small step but it made an outrageous difference because at the time I was working in the fast food industry, getting free lunches everyday at work and that was the first habit to break.

ARE THERE ANY PEOPLE, SERVICES, BOOKS – EVEN QUOTES, THAT UNKNOWINGLY HELPED YOU ON YOUR JOURNEY?
“There is no elevator to success, you have to take the stairs”. This quote as been a constant reminder for me that it’s going to be hard, it’s going to a climb but either way, you’re always moving up. 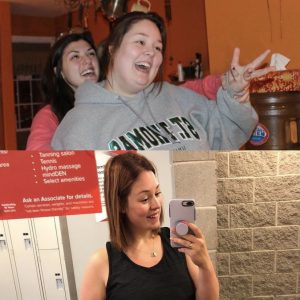 WHAT DID THIS JOURNEY TEACH YOU ABOUT YOURSELF?
That I am resilient. I am capable of doing something that I set my mind to and I am capable of loving my body! The biggest thing this journey has taught me is self love and self respect. You only get one body, so take care of her! 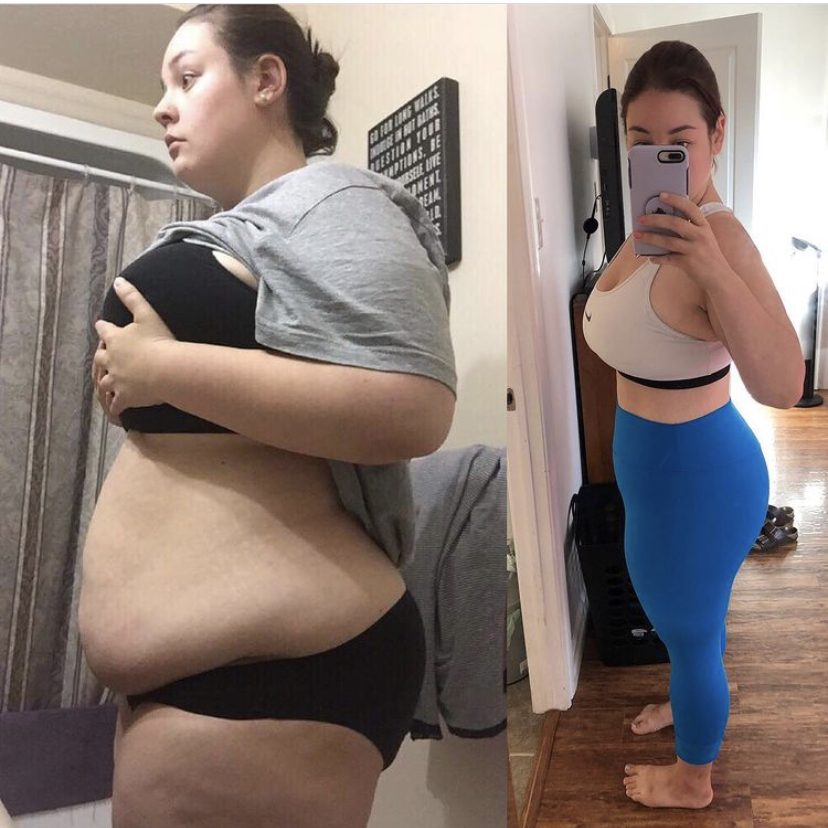