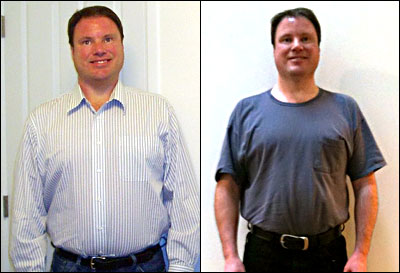 Carl Conn breezes through 100-mile bike rides, takes Spinning class, walks everywhere, and hikes regularly near his home inBellevue,WA. Such an active lifestyle should have tipped the scale in his favor, but it didn’t. He couldn’t figure out why he was gaining weight until he met with a nutritionist who shined a light on his poor eating habits.

Look leaner in 6 weeks with this easy plan

He wanted to improve his cholesterol levels and blood pressure, the former for which he was taking medication. His doctor said he was setting himself up for a heart attack, and the 45-year-old software test engineer knew he was too young to hear those words.

Carl, who has severely impaired vision, lived a typical bachelor lifestyle. He knew the pizza delivery guy by name. He frequented happy hour with friends. He never turned on the stove. (Video: Steam healthy veggies in a flash.)

Near the end of 2009 Carl stumbled upon the web site of Ashley Harris, RD. She advised him to track his food for a few weeks using myfooddiary.com. When she reviewed the log she found that Carl filled up on empty calories and his sodium was off the charts. “Carl felt that he was doing all the right things [like staying active],” she says. “He didn’t realize how much one or two bad meals a week were undoing his hard work.”

Ashley stressed the importance of understanding nutrition labels. Often the print on the food package is too small for Carl to read, so he started researching products online before heading to the market. He has also applied this strategy to dining out. Before, if he couldn’t read the menu he’d just order the standard burger or pizza. Now, he eats at places with menus posted online. Instead of a cheeseburger, he’ll order a steak salad (after verifying that it is a healthier option).

Carl also changed the way he eats at home. He traded his morning cereal for cottage cheese and egg whites. He cut out soft drinks and learned how to make simple recipes, for instance, spaghetti with turkey meatballs. Most days he packs his lunch: a whole wheat turkey sandwich, baked potato chips, and water.

He lost 22 pounds in the first 6 months and continues logging his food and weight online. Examining the data has helped him stay on track. These days, he meets with Ashley once a month and exchanges weekly emails. “He lets me kick him in the butt if he needs motivation or pick him up if he’s down on himself,” she says.

Carl bought new jeans—the old ones wouldn’t stay up even with a belt. But he’s not done yet. He wants to weigh less than 200 pounds and get off his blood pressure medication. The stats so far are promising: He has completely flipped his cholesterol and blood pressure numbers, and his doctor will soon decide on reducing Carl’s prescription to every other day.

He enjoys 75-mile uphill bike rides on the weekend. Since he’s lost weight, the hills have become much easier.

Get a dietitian. “Hire a professional if you’re serious about losing weight, even if you have to pay for it.”

You have to make sacrifices. “I like to drink beer with the guys after work. Sometimes I don’t go—I know I’ll sit at the bar with a plate of nachos.”