The Little Thing In Your Head That’s Keeping You Fat 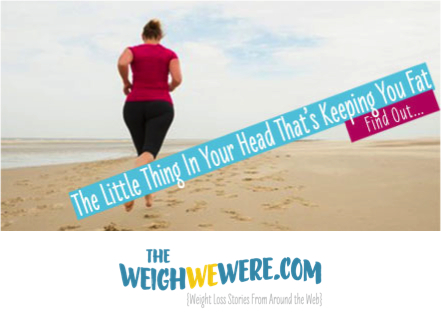 Self-limiting beliefs are among the biggest problems that people deal with in their struggles to achieve a healthy ideal weight. They’re also one of the reasons that so many people start to falter or fall off the diet and exercise wagon as early as late January or early February in their New Year’s goal pursuits.

If you’re that science guy I spoke of and you’re about to bail because you’re thinking, “Here we go again… another psycho-babble, self help article,” then think again. A belief is the force behind the placebo effect, which is well known by every scientist and medical professional. A respected doctor gives a patient a pill and is told it’s a powerful drug. The patient gets well immediately, not knowing that the “miraculous” substance was a dummy pill. Inert. Sugar. The miracle was in the mind.

But beliefs are not only involved in the mind-body connection, they are unconscious programs that control your behavior. The most important factor in whether you achieve the body and the health you want is NOT what diet or training program you follow. It’s what makes you follow your diet and training program. And guess what? What you believe controls your behavior – whether you will stick with your program or sabotage it with cheating, bingeing or inconsistency.

What to do about limiting beliefs

Ok, so now you agree that beliefs are psychological factors that affect you physically by controlling your behavior, including your eating, exercising and lifestyle. What now? 3 steps. 2 questions.

You are fully aware of many of your beliefs. For example, beliefs about spirituality or politics are usually in the front of your conscious mind.

But the beliefs that hold back your health and physical development the most are usually the ones you don’t even know you have. They are like unconscious “brain software,” running silently in the background.

So the first step is to bring those unconscious and potentially damaging beliefs up to the surface so you are aware of them. You can’t fix a problem if you don’t know you have one.

2 Quick Questions That Will Help Draw Out Your Beliefs

Beliefs can go back to childhood, but don’t worry, you don’t have to go to a psychotherapist and be regressed back to kindergarten. It’s simpler than that. But it does pay to do this questioning process as a formal “exercise” with serious quiet time, with pen and paper (instead of just thinking about it).

Question #1: What causes me to be overweight (or unhealthy, or not having the body I want)?

Question #2: What’s preventing me from getting leaner? (or healthier?)

Spend some time with it and see how big of a list you can create. Ask yourself whether each belief helps or hurts you. Does it move you forward or backward. Does it empower or disempower you? The ones that hurt you or hold you back will be obvious. You may come up with beliefs such as:

“I’m overweight and I can’t get leaner because”:

But the million dollar question is; Are these beliefs actually true?

Beliefs are not facts. You may hold your beliefs as absolute reality, but when you deconstruct them and challenge them, you may see that they don’t hold any water.

Self limiting beliefs are false interpretations (negative thought patterns) that hold you back. And you keep holding on to them because making excuses and staying the same is a lot more convenient than changing isn’t it? Change requires hard work, effort and leaving your comfort zone.

Your mission now: weaken the limiting beliefs and get rid of them

How do you challenge a belief? 4 ways:

(A) Challenge it directly: Is the belief even valid at all? See if you can find a “counter example” that disproves your belief. For example; if you think that after you’ve had 3 or 4 kids, it’s impossible to get a nice flat stomach, what will you say after I introduce you to a dozen of my clients and readers who had 3 or 4 kids and went from bulging belly to rock-hard flat stomach? If they did it, then how could your belief be valid? Answer: It WASN’T! You believed something false and inaccurate and it was holding you back!

(B) Challenge the source:Is it your belief, or have you been living what your parents, peers or culture handed down to you? Just the realization that a belief wasn’t yours to begin with is enough to shatter it.

(C) Challenge the usefulness of the belief. Ok, so you believed something when you were younger. Does still believing it has any usefulness today? Does it help you move closer to what you want in your life today? If not, then when today would be a good time to get rid of it?

Nature abhors a vacuum, as Spinoza once said. You don’t simply get rid of a belief, you also must replace it. What things would you want and need to believe instead that would create positive behaviors that would move you toward your goal? Write them down, then massage them into an affirmation. For example, if you’ve hung your hat on the belief that you didn’t have time to exercise, could you write a new affirmation of belief similar to this?

“I’m a very busy person, so that means I must set clear priorities and I must keep my health and body on the top of my priority list. I always schedule time for my most important priorities, I am efficient with my training, and I use every minute of my day wisely. And if Barack Obama, the busiest person in the world, can train for 45 minutes a day 6 days a week, there’s no excuse for me. I can do it too.”

Write down your new belief affirmations and read them, right along with your goals, every day.

Then “activate” this affirmation by doing what Olympic and professional athletes do: engaging in mental rehearsal. Visualize yourself carrying out the behaviors that this belief would generate. Think about and feel what it would be like to take those positive actions steps and play mental movies of how your life would change by doing so. Involve all your senses: see it, hear it, feel it.

Keep it up until you start to see your behavior change and your habitual actions come into alignment with your goals/intentions. If you’re diligent, you’ll see changes in attitude and behavior with 21-30 days. It may happen sooner. It may take longer if you’ve carried deep, lifelong limiting beliefs. But in less than a month, the roots of the new belief pattern will be formed.
Then you can update your goals and affirmations to reflect your current priorities and move on to the next goal you want to achieve or the next limiting belief you want to change. Keep THAT up, and pretty soon, you will be LIMIT-LESS! BELIEVE ME, spending quality time understanding and working on your beliefs is a lot more productive than spending time in forums arguing about whether a low carb program is better than high carb program… or even whether the cure for obesity is found in the arcuate nucleus of the lower hypothalamus. It’s in your head allright… but most people have been looking in the wrong place. Train hard and expect success, ~ Tom Venuto

Related Items
← Previous Story The Myth of “Moderate” Exercise (for weight loss)
Next Story → How to stop songs from getting stuck in our heads? Chew some gum!