The BIGGEST predictor of weight loss success is… 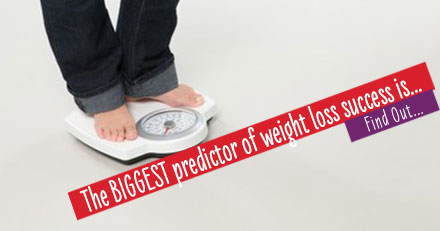 You have to wonder, is anyone out there losing weight?

In fact, we know 4,500 people who are: The men and women enrolled in the National Weight Control Registry have each lost 30 pounds or more–and kept it off for at least a year. Obesity experts James O. Hill, PhD, and Rena Wing, PhD, founded the registry in 1993 to study what works and what doesn’t when it comes to weight loss. The participants’ average weight loss is 67 pounds. And the average length of time they’ve maintained it is an equally impressive 5 1/2 years.

How did they do it? Holly Wyatt, MD, an assistant professor of medicine at the University of Colorado Health Sciences Center and a frequent research partner of Hill, reveals the registry’s been-there, trimmed-that secrets. Read up–and slim down. For good.

Get Physical
By far, the registry’s biggest predictor of weight loss success is a high level of physical activity. “You can be very successful at losing weight by changing or restricting what you eat,” says Wyatt, who is also a Prevention advisor. “But studies like ours show that the only way to keep that weight off is through exercise.”

The reason: When you diet, you tend to pare muscle as well as fat. Muscle loss slows down your metabolic rate (meaning you burn less food for energy and possibly store more of it as fat). To rev up your metabolism–and maintain your weight loss–you have to maintain muscle mass through exercise.

Registry participants burned an average of 2,800 calories a week, or about 400 calories a day, through exercise. That’s equivalent to about 4 miles daily of fitness walking, which is the activity chosen by the majority of the participants (although an increasing number of female participants also supplement their walking with strength training). “It takes, on average, between 60 and 90 minutes of activity every single day to maintain weight loss,” says Wyatt. “Thirty minutes most days of the week–the message most of us remember–is what you need to do to improve your heart health, but it’s often not enough to prevent you from regaining any weight that you’ve lost.”

Eat Breakfast:
Most of the registry’s losers have a morning meal. The scientists can’t say for sure why eating breakfast helps, but a study recently published by Wyatt showed that it isn’t because breakfast eaters consume fewer calories throughout the day than breakfast skippers do. The two groups reported eating about the same amount, but the breakfast eaters said they exercised more.

“Maybe the eaters had more energy than the skippers,” says Wyatt. “Maybe eating breakfast and exercising daily are just two health-promoting behaviors that tend to cluster together. Whatever the reason, though, eating breakfast is definitely linked with maintaining weight loss. I recommend a lean, 200- to 300-calorie breakfast to my patients.”

Wyatt suggests mixing a low-fat protein source and a carbohydrate, such as scrambled egg whites wrapped in a low-fat, high-fiber tortilla, or oatmeal made with low-fat or fat-free milk. “European studies are showing that if you boost your protein intake a little bit, lower your carbohydrate consumption a little, and keep your fat intake low, you may lose more weight than you would if you ate the same number of calories but had a higher carb intake,” she says.

Stay Tuned:
Seventy-five percent of registry participants weigh themselves at least once a week. By keeping track of your weight and what you need to do to maintain it, such as stepping on a scale, keeping a food journal, or recruiting an exercise partner, you won’t be surprised by “mysterious” and discouraging weight gain.