Weight Loss Before and After: Tami’s Amazing 15 Pound Body Transformation 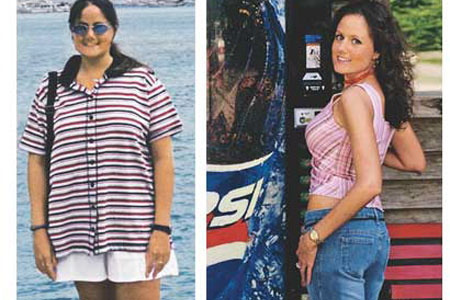 Trading in her office desk for the fitness treadmill helped Tami Carter lose 15 pounds and land a new job.

The Gain: Tami Carter had been a little overweight for most of her life, but taking a job in human resources at a corporate office back in 2000 is what really did her in. “My position wasn’t very active, and I gradually started gaining and gaining at work,” she says, remembering how she couldn’t resist the cookies and brownies that coworkers kept bringing by her desk. Within a year and a half, she’d packed on more than 15 cupcake-fueled pounds.

The Change: Whenever she’d gone for medical checkups in the past, Carter would overestimate her weight so she’d be pleasantly surprised when the nurse read out the true number. But this time, Carter’s guess was way off — in the wrong direction. The shock of seeing the scale register 164 was all it took to spur her to action. “I used to eat whatever I wanted,” she says. “It was like I was living to eat. Now I knew I needed to eat to live.”

The Life: Refusing to touch office treats, carefully tracking what she ate, and trying to incorporate healthier foods into her diet wasn’t all that difficult. The tough part was forcing herself to move. “It wasn’t until I got laid off in October 2001 that I thought, ‘I don’t have any excuses here,'” Carter says. The tight job market meant that she suddenly found herself with hours to spare for exercise. “I wasn’t working, so it was time to get serious!” To kick her metabolism into gear, Carter began working out on a treadmill or cardio bike at home, then added walks on trails to her fitness routine. By the following summer, she’d already reached her goal weight, and in 2003 she started modeling for local store ads and commercials. About 2 years later, she took a job at Gold’s Gym, where she got turned on to weight lifting. Now she strength trains several times a week.

The Reward: Trading in extra pudge for solid muscle has sparked a whole new career for Carter and rocketed her self-esteem to new heights. “I never had the confidence to play sports,” she says. “Now I feel like I can do anything.”

Sub something for nighttime snacks. “Chew gum or brush your teeth. It curbs hunger and gets your mind off wanting to eat.”

Try new tastes. “I love turnips, peanut butter, and low-sugar jelly…together. I slice the turnip like a cracker, and on goes the PB&J. You never know you’ll like something until you try it.”

Pump up your food. “I put vanilla protein powder in my oatmeal or my pudding and mix flaxseed meal or flaxseed oil in bread and piecrusts—it’s a good, healthy fat.”