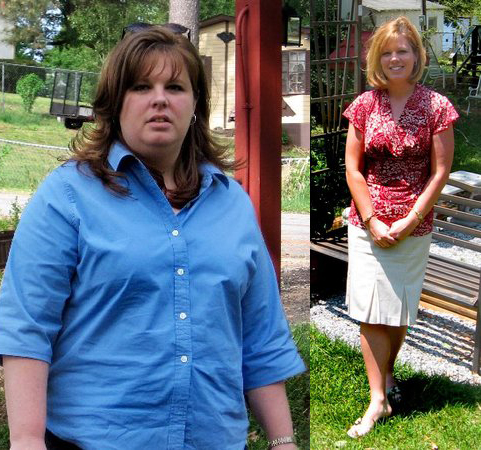 > Personal life: “I believe in this plan so much that I now work for Weight Watchers as a leader,” she says. Coryell lives in McDonough with her husband of 15 years, Glen, and two daughters, Ally and Madi.

> Turning point: After Christmas 2006, Coryell was looking through holiday pictures. “Honestly, I did not recognize myself —- that, along with a family history of diabetes, heart disease, high blood pressure and high cholesterol, made me decide I needed to do something about it now,” she says. “I made losing weight, along with quitting smoking after 20 years, my New Year’s resolution.”

RELATED:   Weight Loss Before and After: Vanessa Shed 30 Pounds And Looks Better Than Ever

> Diet plan: Breakfast is yogurt, oatmeal or eggs with Canadian bacon. Lunch is either a turkey sandwich or grilled chicken on a salad. Dinner is usually chicken or fish with lots of veggies.

> Biggest challenge: “My biggest challenge has been the mental part of losing weight,” she says. “In my mind, sometimes I’m still the ‘before’ picture. That’s just going to take some time to adjust.”

> How life has changed: Coryell says her life has changed completely. “I never had any energy; now, I’m going all the time. I was battling depression and now it’s completely nonexistent. I’ve also been able to see my girls change their eating habits by watching me. They’ll now ask, ‘Mom, is this healthy?’ before eating anything. And if it’s not, they make a better choice —- that is priceless.”

RELATED:   Before And After: Ophelia Lost 53 Pounds Through Cardio And Lifting