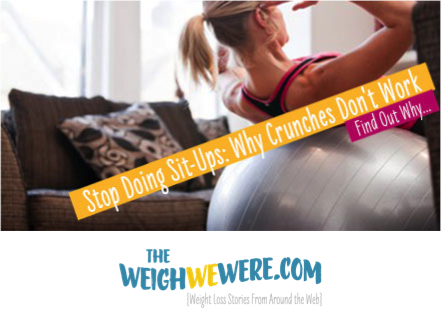 {Kat note: Scroll to the END of the article to see a link to a VIDEO version of this article complete with demonstrations of ‘better’ core/ab exercises}

Everyone knows that the road to flat, tight abs is paved with crunches. Lots and lots and lots of excruciating crunches. Or is it?

As it turns out, the exercises synonymous with strong, attractive abs may not be the best way to train your core—and may be doing damage to your back.

“We stopped teaching people to do crunches a long, long time ago,” says Dr. Richard Guyer, president of the Texas Back Institute. That’s because the “full flex” movement—the actual “crunch” part of crunches – puts an unhealthy strain on your back at its weakest point. The section with the most nerves (and most potential for nerve damage) is in the back of the spine, which is the very part that bends and strains during a sit-up.

“There are only so many bends or a ‘fatigue life’,” in your spinal disks,” says Stuart M. McGill, a professor of spine biomechanics at the University of Waterloo. Inside each disk is a mucus-like nucleus, he says, and “if you keep flexing your spine and bending the disk over and over again, that nucleus slowly breaches the layers and causes a disk bulge, or a disk herniation.” A herniated disk won’t show through your swimsuit, but it’s no fun, and can cause persistent back and leg pain, weakness, and tingling.

Think of the oft-repeated advice for movers: bend at the hips and lift with your legs, not your back. And what is a sit-up but a back bend done in a lying position? “When people are doing curl up over gym balls and sit-ups, and this kind of thing, they are replicating a very potent injury mechanism on their back,” says McGill. “Every time they bend it they are one repetition closer to damaging the disk.”

And of course, when people do crunches, they rarely stop at one or two: in the quest for flat abs, they’ll churn out dozens at a time, bringing them ever closer to “flex intolerance”—so much pain and stiffness that it’s difficult to tie one’s shoes or bend down to pick a penny off the ground.

But who cares about back health as bathing suit season approaches? Turns out, crunches might not be the best solution for a flat stomach, either. That’s because doing too many sit-ups at the expense of other, more comprehensive movements can lead to the dreaded “aerobic abs.” That’s the term celebrity trainer Steve Maresca coined to describe the distended stomachs of those who focus only on the rectus abdominus muscles targeted by sit-ups and crunches. “They look great from the front, but when they turn to the side, their stomachs are extended,” he says. To get the long, lean look, one needs to work transverse abdominius, a large muscle that holds in those rectus abs, and is mainly unchallenged by traditional ab work (aka, the sit-up and crunches).

Doing a sit-up doesn’t train your ab muscles to do the job for which they were designed – keeping your spine straight and secure and providing power for your movements. In everyday life, “the abdominals are braces,” says McGill, author of “Ultimate Back Fitness and Performance” (Stuart McGill, 2004). When doing any athletic movement—even opening a door—“the spine is in a neutral posture, not flexed, and the abdominal muscles are contracted to brace the spine.”

The best way—for both your back and your beach body—to work your midsection is to do movements that challenge the muscles to perform the way they’re designed and expected to work in real life, and not to train muscles in isolation. “It’s important to have strong abs, but strong abdominals are not the only thing,” says Dr. Guyer. “You have your back extenders, your flexors, which are belly muscles, you have your oblique muscles.” Working all of these muscle groups—the anatomical association known as “the core”—is essential to both back health and general athleticism.

Consider the pushup. Not usually thought of as a great ab move, the pushup forces you to work several muscles at once: it forces your core muscles to stabilize your trunk as your arms and back work to move the body up and down. “Do you see how a pushup is a full body challenge?” says McGill. “It challenges abdominals, front of your legs, your arms and your back. That is how you use those muscles in real life.”

Like the pushup, the best exercises for back health and a firmer stomach are ones that work your abs while holding your spine straight, like planks or leg drops (done when you lie flat on your back, with your hands at the base of your spine for added support. Raise your legs up at a 90 degree angle, then slowly lower until they’re only inches from the ground. Repeat until your stomach burns and you want to throw up). And because your core is the center of power for most other exercises, a long workout full of dynamic movements targeting legs, arms and back also translates to a good core workout. (For more examples of effective ab exercises, visit McGill’s site, backfitpro.com.)

Of course, it won’t matter how muscular your torso is if your body fat is too high. The best way to build strong, visible abs isn’t through repeated sit-ups, but by engaging in circuit training that has you working your entire core while you’re burning calories – and to keep yourself disciplined during meals. “If you want to burn your fat mass, make sure you have a combination of weight training and cardiovascular, but 90 percent of good abs is your nutrition,” says Maresca. However, he does offer a quick tip for those of us with a weakness for caloric food: standing up straight and pulling back your shoulders will instantly tighten your transverse abdominal muscle, making you look a little leaner. It’s not quite as impressive as showcasing a well-developed core via 10 percent body fat, but it does leave a lot more time and flexibility for hitting up happy hour.

NOTE: This link takes you to a video of examples of ‘better’ ab/core exercises. The guy is kind of ‘clinical’, but stick with him. The info is VERY good. http://blog.newsweek.com/blogs/thehumancondition/archive/2009/06/03…

Related Items
← Previous Story Want to lose weight? Join a weight management group that is meaningful to you
Next Story → The Myth of “Moderate” Exercise (for weight loss)