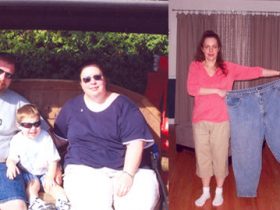 Gretchen’s challenge Gretchen’s regular running routine lapsed when she began touring with her son Ryan, a pro skateboarder. Plus she often turned to food for comfort. “Whenever I was stressed out, I’d eat the first thing I saw,” she says. After a year on the road, she’d put on 35 pounds. The camera doesn’t lie Gretchen’s attempts to eat less while traveling backfired. “I’d start out the day with just a cup of coffee and then skip lunch; by 4 p.m. I’d be ravenous, eating anything I could get my hands on,” she says. “Later I’d think, I’ve eaten only one meal today, so it’s okay to splurge on a burger and fries.” To make matters worse, she was no longer running. “I knew my sedentary lifestyle was unhealthy, but I was still surprised when I gained weight,” she says. A home video put it into sharp focus: “I was mortified by how I looked,” she says. “I decided right then to commit to shaping up.”

Getting back on track Gretchen resolved to run four to five miles several mornings a week, something she could accomplish anywhere. She did some research on nutrition and changed her eating habits, cutting back on refined carbs and eating frequent, small meals like egg-white omelets, salads with grilled chicken or ahi tuna, and sushi. Having read about the importance of strength training, she began doing crunches and walking lunges as well. “I also started going to the hotel gym to work out with some of the other mothers on tour,” she says. Within a year, Gretchen had lost all the weight she had gained, plus an additional 10 pounds. “I was so energized, even jet lag didn’t get to me,” she says. She continued to drop pounds. “I passed 130 and settled in around 125,” she says. “My husband couldn’t believe it-nobody could.”

Outlook: healthy Today, Gretchen works out about six days a week, but she’s comfortable tweaking her habits when life gets in the way. “Making my well-being a priority most of the time means I don’t need to beat myself up whenever I do have dessert or miss a run,” she says. She’s also better able to juggle the demands of travel and parenthood. “I used to think that making the time for healthy habits was selfish,” she says. “Now I know that it means I’ll always have stamina and strength for my kids.”

Make it a game “To keep my runs from getting boring, I’ll stop at a park bench to do step-ups and walking lunges.”

Learn to say no “They may serve four meals during a 14-hour flight, but that doesn’t mean you have to eat all of them. It was a revelation for me: You do have the option not to put food in your mouth.”

Pack nutritious snacks “I never used to be a planner, but life has become so hectic that I appreciate having a protein bar in my bag whenever I’m traveling.” Weekly workout schedule

Pilates or yoga 60 minutes/3 times a week To submit your own success story, go to shape.com/model.