A DIFFERENT LIFE: Before I lost the weight, my two favorite foods were ice cream – my favorite flavor of ice cream was whatever you had – and I could knock one a big hamburger with bacon and cheese right before I went and got a big steak somewhere.

THE TURNING POINT: My aha moment was when I went to get my medicine, because when they brought me my medicine, it was like $102. I was like, “Aha! I can’t afford this every month.  I can’t pay $102 on medication.”

DOCTOR, PART TWO: The first month, I took the medication the first week and I started exercising. My numbers, I put them in a spreadsheet.  The second week I decided not to take the medication and to check my numbers the same way and they were just as good the second week as they were the first week with the medication. So I said, “Well, I’ll go another week.” I did the third week, got the month, I sent the spreadsheet to the doctor, and he says, “Well, it looks like everything that we’re doing is working. This is great. Everything is going good.” And I said, “Well, you know, I’m not taking the medicine, right?” He goes, “Oh, you have to take the medicine.” “Well, you just told me that I didn’t because everything was going good.”

THE PLAN: You have to do something that works for you. If it is getting up in the morning at 4, great. If it’s getting up at the crack of noon and go on to the gym at 1, whatever works for you, but you’re going to have to do some sort of a workout or some sort of exercise. For me it’s become a very critical part of what I’ve done. And I decided what I was going to do is I was going to look at sugar. If it’s 6 grams or above, I look at it and go, “Do I want this or do I want my foot?” And that’s what forced me to make those decisions ever since then. There are a lot of times people tell me that I’m really harsh, but that’s just the way that it is.

WORDS OF WISDOM: Southern food definitely contributes to anybody’s weight problems or weight issues or diabetes or fat or whatever it is because I mean you’re talking about a place that fries okra. We fry vegetables all the time. I think that it’s important that people especially in the south know that they can do this. When we get around those people that say, “You can do it,” then you can. 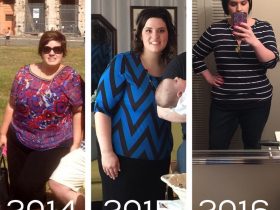