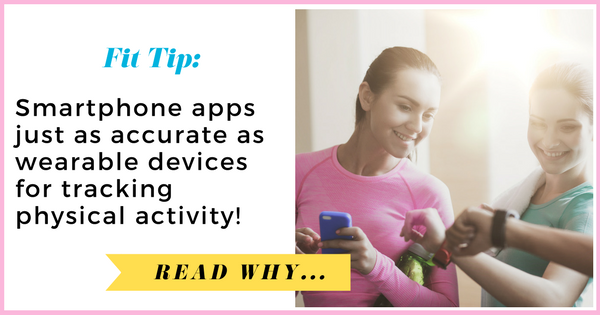 Although wearable devices have received significant attention for their ability to track an individual’s physical activity, most smartphone applications are just as accurate, according to a new research letter in JAMA. The study tested 10 of the top-selling smartphone apps and devices in the United States by having 14 participants walk on a treadmill for 500 and 1,500 steps, each twice (for a total of 56 trials), and then recording their step counts. Led by researchers at the Perelman School of Medicine and the Center for Health Incentives and Behavioral Economics at the University of Pennsylvania, this study is a follow-up to a recent JAMA viewpoint suggesting that there’s little evidence that wearable devices alone can change behavior and improve health for those that need it most.

“In this study, we wanted to address one of the challenges with using wearable devices: they must be accurate. After all, if a device is going to be effective at monitoring — and potentially changing — behavior, individuals have to be able to trust the data,” said lead study author Meredith A. Case, BA, a medical student at Penn. “We found that smartphone apps are just as accurate as wearable devices for tracking physical activity.”

Each of the study participants, all healthy adults recruited at Penn, had the following devices on during the treadmill trials:

“Since step counts are such an important part of how these devices and apps measure physical activity, including calculating distance or calories burned, their accuracy is key,” said senior author Mitesh S. Patel, MD, MBA, MS, assistant professor of Medicine and Health Care Management at Penn and an attending physician at the Philadelphia VA Medical Center. “Compared to the one to two percent of adults in the U.S. that own a wearable device, more than 65 percent of adults carry a smartphone. Our findings suggest that smartphone apps could prove to be a more widely accessible and affordable way of tracking health behaviors.”

The other Penn study author is Kevin G. Volpp, MD, PhD. This study was funded in part through a grant from the National Institute on Aging (RC4 AG039114-01). Patel’s work was supported by the Department of Veterans Affairs and the Robert Wood Johnson Foundation.

Related Items
← Previous Story Why you shouldn’t exercise to lose weight, explained with 60+ studies
Next Story → Weight Loss: Is It Better to Bike or Run?