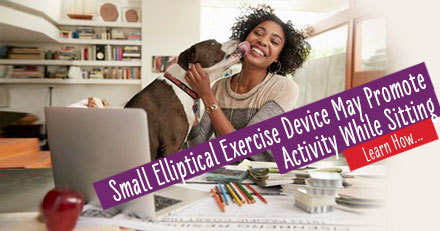 People may be able to keep the weight off by using a compact elliptical device while sitting at a desk or watching TV, according to Penn State College of Medicine researchers.

“Adults in the United States spend more than 11 hours per day sitting while doing things like watching television and working on a computer,” said Liza Rovniak, assistant professor of medicine and public health sciences. “Evidence suggests that this sedentary lifestyle has contributed to average weight gains of one to two pounds per year among U.S. adults over the last 20 years.”

The researchers looked at using a compact elliptical device (like this Desk Cycle) to increase physical activity while sitting. They chose this device because it is lower in cost than other options like treadmill desks, is quiet and requires only a small floor area.

Scientists selected 32 participants who used the elliptical device while sitting in a standard office chair. “The researchers monitored their energy use, heart rate and other biometrics. They were also asked how much interest they had in using the device while watching television, using a computer, reading, in a meeting and in general.

The results suggest a majority — 86 percent — of participants could expend enough energy in one hour a day to prevent weight gain. The other 14 percent would have had the same result if they increased the pace of pedaling slightly.

“Assuming participants held other components of energy balance constant, daily use of the elliptical device for one hour might result in a weight loss of 5.2 pounds per year and help prevent the one-to-two pound annual weight gain among U.S. adults,” Rovniak said.

Participants also reported a high interest in using an elliptical device while watching television and using a computer, but not while in office meetings.

“Since watching television and using a computer are among the most common reasons people sit, the compact elliptical device might hold potential as a way to increase people’s daily caloric expenditure,” Rovniak said.

Because of its compact design, it can be placed in areas that are close to where a person sits, giving visual prompts to use the device.

The researchers still need to study whether compact elliptical devices can sustain increases in the amount of energy expended over longer periods of time and whether the devices improve health.

“By continuing to explore how best to use elliptical devices  and other energy expenditure strategies across diverse settings, it may ultimately be possible to reach enough people to alter rates of chronic diseases associated with inactive lifestyles,” Rovniak said.