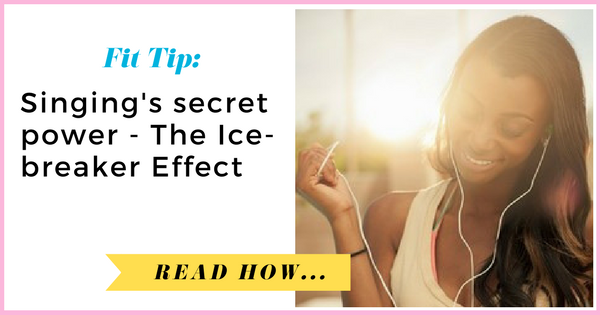 We have long known the power of a good sing-along. Now, research from the University of Oxford has shown that singing is a great ice-breaker and can get groups of people to bond together more quickly than other activities can.

Dr Eiluned Pearce, from Oxford’s Department of Experimental Psychology led the research. She said: ‘One of the key differences between humans and other primates is that we can exist in much larger social groups. Singing is found in all human societies and can be performed to some extent by the vast majority of people. It’s been suggested that singing is one of the ways in which we build social cohesion when there isn’t enough time to establish one-to-one connections between everyone in a group.

‘We wanted to explore whether there was something special about singing as a bonding behaviour or whether any group activity would build bonds between members.’

To test the theory, the researchers worked with charity the Workers’ Educational Association (WEA), the UK’s largest voluntary sector provider of adult education. The WEA set up seven courses, four in singing, two in crafts and one in creative writing. Each course, made up of weekly sessions, was run over seven months, with a break in the middle.

Those attending the classes were given surveys before and after individual sessions in the first month, in the third month and at the end of the seven-month course. In it, they were asked to rate how close they felt to their classmates.

Dr Pearce said: ‘We had expected the singing classes to feel closer to each other than the other classes at the end of the seven months. However, we found something different.

‘For every class, people felt closer to each other at the end of each two-hour session than they did at the start. At the end of the seven months, all the classes were reporting similar levels of closeness.

‘The difference between the singers and the non-singers appeared right at the start of the study. In the first month, people in the singing classes became much closer to each other over the course of a single class than those in the other classes did. Singing broke the ice better than the other activities, getting the group together faster by giving a boost to how close classmates felt towards each other right at the start of the course.

‘In the longer term, it appears that all group activities bring people together similar amounts. In non-singing classes ties strengthened as people talked to each other either during lessons or during breaks. But this is the first clear evidence that singing is a powerful means of bonding a whole group simultaneously.’

Howard Croft, WEA Project Manager, said: ‘We’re really pleased to have taken part in this experiment, which has shown that singing can be a great way to form close bonds with others. Feeling connected to those around you, be it friends or family, is one of the key ways to improve your wellbeing. Adult education of every kind can help improve mental health and boost self-esteem, but singing together is a uniquely communal experience that can foster better relations between people from all walks of life.’

The research is part of a series of studies looking at how music leads to social bonding. Co-author Dr Jacques Launay said: ‘Given that music-making is an important part of all human cultures throughout history we think it probably evolved to serve some purpose. Evidence suggests that the really special thing that music does for us is encourage social bonding between whole groups of people playing and dancing together’.

Dr Pearce added: ‘Really close relationships still depend on interactions between individuals or much smaller groups, but this study shows singing can kick start the bonding process.’