She Will Kick Your Butt in Boot Camp Class 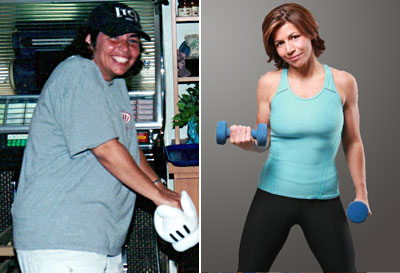 Melanie Landano used to work at an amusement park where life resembled an all-you-can-eat junk food buffet. Then she landed a job at a gym and lost 103 pounds

Melanie Landano, a 37-year-old personal trainer, spent years working at amusement parks in Brooklyn andOrlando. And while Disney World may have been the most magical place on earth, it wasn’t kind to her waistline. After she left the hospitality industry, she settled into a new job at what could be called the healthiest place on earth—a gym—where she met a group of fit people who would make over her life.

Feel the burn with this boot camp workout.

In 1999, Melanie’s doctor told her she was obese and needed to start taking better care of herself. She soon retired her Mickey Mouse ears and moved home toNew Yorkto be near her mother, who had been diagnosed with cancer. After her mother died the following month, Melanie was ready for a change. A local gym offered her a job in customer service. She wasn’t sure an overweight bacon-eating 20-something belonged in that role, but she was desperate to try something different and accepted the position.

Get the only book you need to sculpt a smokin’ body.

With a new attitude and a new job, Melanie quickly learned the ins and outs of gym life. She began eating egg whites, drinking protein shakes, and taking multivitamins. Funnel cake and cotton candy became relics of her past.

Six months later she was ready to begin exercising. She jogged on the elliptical for 20 minutes but got bored quickly. Then she rotated among three cardio machines for 10 minutes each. Soon she was trying out group classes and lifting weights. She even dared to try Spinning class. “I thought I was going to die. It was scary and intimidating.” Before she knew it, she was walking 2 to 3 miles a day acrossManhattanand spending her free time rollerblading and bike riding.

A colleague suggested she get certified as a cycling instructor. That was almost 8 years ago. Now Melanie leads 10 classes a week, motivating others to get in shape like she did. Beyond cycling, she also teaches boot camp and strength training classes at Bally Total Fitness inNew Jersey.

She fills up on grilled meats, fish, low-fat dairy, and vegetables. Since she gave up soda, she drinks unsweetened iced tea and rarely orders a mixed drink (too many empty calories!). She tends to eat six times a day and carries low-sugar, high-protein bars with her for snacking. “I work out a lot—I’m always hungry.”

Her clients keep her going. She strives to be the best version of herself and works hard to show people what they can do. She dreams of opening her own studio and continuing to inspire others. “It feels good when I see people looking different and just being healthier.”

It took nearly 4 years for Melanie to get to her goal weight, and she’s kept it off for more than 6 years. Every summer she’s acutely aware that her efforts have paid off when she runs around town in “cute little outfits” and sports a two-piece swimsuit.

You’ll be rockin’ a bikini in no time with these beach-body workouts.

Don’t be intimidated. “Weight loss is not as hard as people think it is. It’s calories in, calories out. You’re not going to lose any weight if you don’t work out a little harder every day.”

Set realistic goals. “I never set out to lose 100 pounds—it just happened. I needed to get healthy. It turns out I lost 100 pounds because of how I worked out and what I ate.”

Want more tips to get the body you’ve always wanted? Sign up for one of our newsletters!

Related Items100 Pounds Lost
← Previous Story Down 26lbs, 33.5 inches, and 10 dress sizes!
Next Story → Stacey has made an amazing transformation and now maintains a healthy 120 lbs!