She Went Online to Lose Weight! 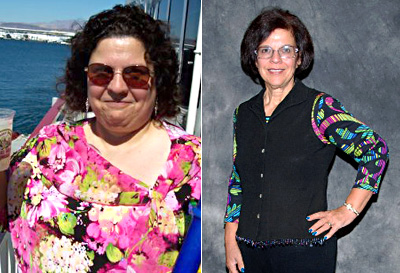 Jeannie Cannon lost 173 pounds with a veggie-rich diet, exercise, and the support of an online community

Jeannie Cannon comes from a family of large women, and at 318 pounds, she had one goal: not to end up in a wheelchair like her mother. (Even after having her stomach stapled, her mom is still overweight.) Jeannie had resigned herself to a life of obesity but continued going to Curves inYukon,Okla., to exercise her knee. One day, the only trainer in the gym refused to help unless she stepped on the scale. A month later she discovered she had lost 16 pounds—without trying.

This surprising dip in weight was the encouragement Jeannie needed to restore her health. She had long given up on the weight loss game because Weight Watchers and other diets offered only temporary fixes. Every time she stopped following a plan, she would gain back the few pounds she had managed to lose. But in early 2009, after a few consecutive weeks of regular exercise, combined with mild dietary changes—more vegetables, less fried food—she realized she wanted to change her body for good.

The self-employed 53-year-old goes to the gym five or six times a week. She typically spends an hour doing a preset circuit that rotates her through a lower-body machine, cardio routine, and upper-body machine. She walks 3 to 4 miles in the evening. Two years ago she could barely make it to the end of the block. Neither Jeannie nor her husband likes to cook, so she’s learned to order restaurant items that are grilled or sautéed. And she strives to eat a vegetable with every meal.

Jeannie joined SparkPeople, an online diet and fitness community, where she leads several teams. Each day she logs onto the site, records her meals, and tallies her points earned for exercising. She has clocked nearly 1,000 fitness hours since June 2009. Aside from SparkPeople, she relies on the memory of physical pain to motivate her. “I used to sit in this recliner thinking, ‘If it didn’t hurt so much, I would walk.’ Now I can either walk or hurt.”

RELATED:   Amanda Worked Exercise Into Her Day And Lost 68 Pounds

Jeannie bumped into an old friend she hadn’t seen in 5 years at Wal-Mart. Her friend, Stephanie, did a double-take before shouting, “How much weight have you lost? I didn’t recognize you!” Then Stephanie turned to Jeannie’s husband and asked, “Have you seen your wife?”

Stay connected. Find a support system whether it’s online or at the gym. If Jeannie is running late to the gym, she’ll get a call or text asking her whereabouts.

Reward yourself. Now that she’s reached her target weight, she aims to stay within a 5-pound range. “If I’m above 148 pounds, I need to watch my calories or exercise more [that day]. If I’m down to 143, I can eat cheesecake with supper.”