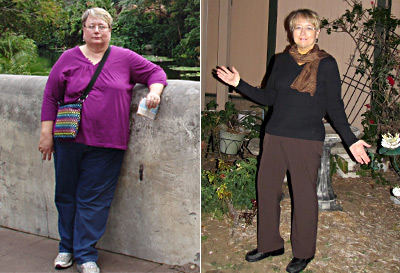 Decade after decade Janet Waddell, 62, found excuses not to make time for her health. If she wasn’t tending to her family, she was preoccupied with work once her two daughters left for college. Tired of wedging herself into airplane seats (her husband is a pilot), Janet knew if she gained more weight, she wouldn’t be able to buckle the seatbelt. But when she was diagnosed with type 2 diabetes in 2008, the church administrator from Collinsville,Okla., decided to lose weight because she wanted to watch her three grandchildren grow up.

Her doctor recommended that she enroll in a diabetes education class, which didn’t help much. “It reminded me of the low-carb Atkins diet. It just wasn’t the right thing for me and my body,” she says. Shortly thereafter, the doctor threatened to put her on medication to control her blood sugar, but Janet cringed at the thought of another prescription. She asked for one more chance. That night she searched online for a solution and stumbled upon Prevention’s Diabetes DTOUR Diet, specifically designed to help balance blood sugar and fight belly fat. She signed up in January 2010 and never looked back. “The online program is great for meal plans, shopping lists, and just keeping me honest.”

Janet cites portion control as an instrumental factor in her weight loss. At restaurants she asks for a take-home box and stashes half her meal out of sight before she even begins eating. She has also incorporated exercise into her regular routine. She rides her 21-speed trike 5 miles a day, three times a week. Recently, she added a weekly swim to her regimen and walks 3 days a week. This past September, her doctor took her off blood pressure medication for the first time in 30 years. “I feel amazingly better and actually have energy!” she says.

Aside from being able to stand inside one leg of a pair of shorts she wore on aCaribbeancruise 2 years ago, losing weight has improved her marriage. She and her husband of 41 years enjoy exercising together and staying active. “We can go more places and do more fun things because I can walk around and not get tired as easily. I’m more fun!” she says.

Pictures don’t lie. To stay motivated, she carries two “before” pictures in her purse and posts signs on the refrigerator that read “This is not a diet. This is your LIFE!”

Do it for your family. “You have to take care of yourself, or you are no help to anyone else.”