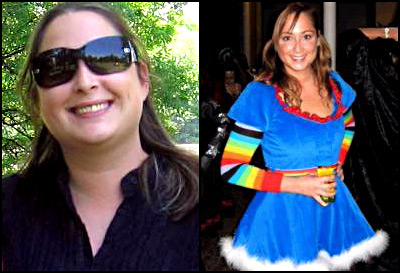 After seeing a photo of herself on Facebook, Isa decided it was time to break the cycle of yo-yo dieting and make healthy changes she could keep

Hitting the scale at 226 on a 5-foot-7 frame was more than depressing. It became a vicious circle: the more my weight increased, the more depressed I became and the more I turned to food. Growing up, I was always the active kid and weight was never an issue. However, the combination of a desk job and a bad relationship caused me to eat my emotions and balloon up to 226.

I remember one day in particular, after a depressing shopping trip where I could officially no longer fit into “regular” size clothes, I logged onto Facebook and saw a picture I was recently tagged in. As much as I refused to acknowledge my weight issue, it finally hit me: Something had to be done.

Over the years, I had done a few crash diets. Every time I lost weight, I would gain it back because frankly these so called crash diets don’t teach you anything about proper eating. Sure, you’ll shed 10 pounds in a week, but since this type of eating habit cannot be maintained, the weight always comes back. This time I decided that rather than approaching the change as a diet, I would simply make a lifestyle change. I stopped eating processed foods such as frozen and ready-to-eat or fast food (yes, I still occasionally had the good old pizza slice), but my diet consisted mostly of fresh fruits and veggies and lean protein. My snacks went from chips to almonds or carrot sticks, etc. Sure food prep took a bit longer, but the results were worth it. I also got a gym membership and now live by the motto of “sweat at least once a day.” These days, I start my mornings with an hour long run and play on various sports teams. This didn’t happen overnight, I remember my first month being completely winded after running for five minutes.

The Key to Success

The key to my success I think was not concentrating so much on the weight loss aspect itself, but more on the healthy change I was trying to bring forward. The goal was to maintain this change for the long run, and not only do it to lose weight. I also didn’t deprive myself. If I knew that I had a dinner out with friends, I would just account for those extra calories with 30 minutes on the spinning bike or something similar on top of my regular work out. Lastly, I kept a food journal. I had heard many times over and over that this was key, but found it to be a chore more than anything else. Over time, when I hit my first plateau, I started keeping tabs on my intake and started to realize that I was eating an extra 200-300 calories a day without knowing.

One of the things that I still find hard is controlling my food intake during an evening out with friends. Once I have a glass of wine or two, that chocolate or cheese or what have you is always way to easy to reach for … I know that and I plan ahead, I’ll eat a protein bar before heading out so I am not as hungry! I think what keeps me motivated the most is how good I feel on a daily basis. Sure, dropping down 10 sizes was a bonus, but the energy level I have is unbelievable. I look and feel like I did in my early 20’s rather than someone who is about to turn 30!

I think the key to handling setbacks is to not give up. Sure there are some mornings where it seems like the day goes right out the window if I end up going for a greasy spoon breakfast. But just because I “cheated” for breakfast does not mean that I have to eat Cheetoes and candies for the rest of the day. One bad meal does not push you to eat bad for the rest of the day … It’s OK to cheat once in a while, it’s the only way that one can maintain this for the long run!

A few weeks ago, I was taking the elevator with a colleague from a floor below who I had not seen in about four months. I had spent those months toning my body rather than losing weight and had acquired a new figure. He got in the elevator, looked blankly at me and never said a word. A few days later I ran into him again and he said, “It is you! I didn’t want to stare in the elevator but I really didn’t recognized you. You have changed a LOT!”