She Made Friends at the Gym 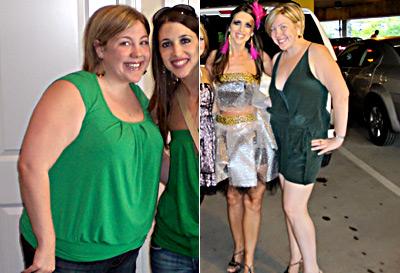 ThisTexas teacher lost 71 pounds with help from a treadmill, a personal trainer, and an iPhone app

Time at current weight: 7 months at 185 pounds or less

Jessica Frank, 27, spent her first two years after college in and out of hospitals. She broke her ankle, which required two surgeries, and broke her foot twice. Though she had always been a “thick girl,” her medical record didn’t helping her weight.

In February 2009, Jessica was admiring a photo in her office: a picture of herself and her size-zero best friend. To her dismay, she realized how awful she looked. “My face was so full, my arms were huge, and I decided that I did not want to take any more pictures like that,” she says. She spent the evening on a treadmill.

Jessica, a teacher fromPlano,Texas, started losing weight gradually by running on the treadmill every night, and then she took up boxing. She began watching what she ate and looking up nutrition information at restaurants. Technology also played a role in her weight loss program. She downloaded the LoseIt! app for the iPhone, which helped her budget her daily calories and “work off” those calories through exercise. Jessica also subscribed to the Hungry Girl website, where she found recipes and advice for cutting calories. After losing 20 pounds on her own, she hired a personal trainer 5 days a week and befriended the owner of the gym and other members who work out there.

While she no longer keeps a daily log of her diet and exercise regimen, Jessica relies on the LoseIt! app if she notices her eating habits are starting to veer off course.

RELATED:   Men Before And After Weight Loss: Jesse Commits To Working With A Trainer And Loses 55 Pounds

Returning to regular clothing stores was a big milestone for Jessica. “Not being plus-sized opened up my wardrobe again, which was awesome!”

Get to know people. “By going to a small local gym, I have built relationships with others there. If I don’t show up for a few days, I hear about it!”

Be optimistic. “Losing weight isn’t nearly as hard as you think it is. Getting started is so much more mental than anything. If you give it some time, you will see results.”

Set short-term goals. “If you ultimately want to lose 100 pounds, have your initial goal be 20. By setting a goal that can be achieved in a shorter period of time, you will be more motivated to reach your long-term goal.”