She Discovered a Love for “Hippie” Food 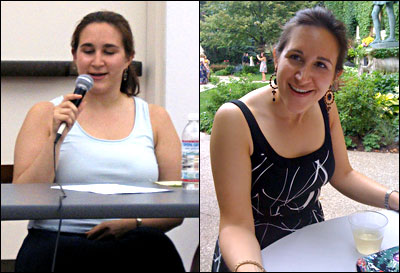 Claire Zulkey, a 31-year-old writer from Chicago, remembers sneaking granola bars from her parents’ kitchen as a teenager. Her desire to lose weight goes back as far as high school, and even though the formula sounded simple—eat fewer calories and exercise more—she couldn’t manage. It wasn’t until she reached her mid-20s that she realized she needed professional help.

Claire wanted to fine-tune her eating habits and lose weight, so she sought the advice of a few experts.

Diagnosed with a binge eating disorder, Claire was caught in a vicious cycle: She would eat as much as a whole pizza in one sitting, feel lousy afterward, and then turn to food for comfort. “It was sort of pathetic—searching for ways food could fulfill me physically and mentally.”

Claire had lost about 20 pounds while meeting with a therapist who helped recalibrate her thinking, giving her the confidence needed to quit binge eating. When her therapist went on maternity leave in 2006, Claire was referred to Dawn Jackson Blatner, RD. Every dieter shows signs of binge eating, but everyone falls in a different place along the continuum, Dawn explains.

Under Dawn’s guidance, Claire learned healthy eating strategies such as how to make smart choices at parties, pick nutritious options at restaurants, and cook dietitian-approved meals at home. She aims to fill her dinner plate with 50 percent vegetables, 25 percent protein, and 25 percent carbs, which often show up in the form of barley, farro, or wheat berry. “They sound hippie-ish to other people, but I can’t get enough.” As a longtime lover of vegetables, she has since developed an affinity for dark leafy greens, such as spinach, arugula, and kale.

Claire used to weigh herself every day (except on vacation) for almost 4 years, though she recently cut back to once a week. She wanted to focus on how she felt rather than let the scale dictate her disposition. She also keeps a daily log of what she eats and how much she exercises with no regard for calorie counts. “I’ve never seen anyone log as consistently as she does. That’s one of the main reasons she does so well,” says Dawn, who still acts as a resource to Claire via an occasional e-mail.

After losing roughly 25 more pounds working with Dawn, Claire decided to step up her game. She wanted to get toned in anticipation of her October 2008 wedding and hired a personal trainer, who gently transformed her into the most unlikely persona—a runner. With a 5-K, 8-K, and 10-K under her belt, she’s ready to tackle a half-marathon. She typically runs 10 miles a week over 3 days and strength-trains 2 or 3 days. Once a week she works out with her trainer at home, using minimal equipment: dumbbells, resistance bands, and a step.

Don’t go another day without tips from our fitness experts

It’s hard to find motivation once you reach a satisfactory number on the scale, Claire says. But setting a goal, such as training for a race, gives her something to work toward.

A friend recently forwarded Claire an e-mail about yoga for runners addressed to “you exercise types.” She never expected to become that kind of person but is glad she did. “Every now and then while I’m out jogging, I’ll realize where I am in my life and with my body, and I get choked up.”

Stay positive. “Beating yourself up accomplishes absolutely nothing, so stop with the negative self-talk.”

Adjust your perspective. “Try to think more in terms of adding healthy foods to your diet rather than taking away. You can have your cake after you eat your vegetables.”

Check out the only nutrition book you’lll ever need