Male Before And After Weight Loss: Russell Lost 50 Pounds Without a Gym 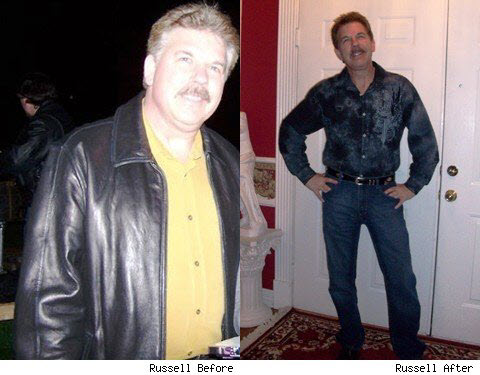 How I Gained It: When I gained the weight, I was working all the time. I wasn’t exercising, and I was eating way too much fast food at the wrong time. Plus, when I ate, I wouldn’t think twice about having seconds or thirds and I’d always top it off with dessert.

My drinking habits were similarly bad. I was drinking mostly soft drinks and not enough water. And I was not getting enough sleep. It all resulted in 50 extra pounds.

Breaking Point: I had my annual physical in February of 2008, and that’s when I realized I had gained 30 pounds over the course of three years. At that time, I was also diagnosed with severe sleep apnea.

A while later, I was officially diagnosed with Type 2 diabetes after losing a bit of the weight, but my wife — a registered nurse — had diagnosed me before that. I was shocked and stunned, and it really was a life changing moment to realize that my body was dependent on insulin and medicine.

RELATED:   Weight Loss Success Stories: My Healthy Journey To Losing 200 Pounds And Getting My Life Back

How I Lost It: I never really went on a true “diet.” I just ate healthier, better foods and started enforcing strict portion control, which meant no more seconds or thirds. I replaced soft drinks with healthier beverages like water, skim milk, Crystal Light and an occasional Coke Zero.

But the biggest change I made was becoming very regimented about my exercise. I started riding my road bike three to five days every week come rain or shine, and I rode for around six to 10 miles per day. I now also have an inside exercise bike that I can ride even when the weather is bad. Plus, I threw in some additional cardio, push ups and sit ups. Now, I have a great fitness routine that works for me, and I do it all at home without paying any gym membership fees. I lost 30 pounds within my first 12 months of working out, and since then I’ve lost another 20. All in all, it took me 18 months to trim down.

The results have been amazing — with all my exercise and my so-called “diet,” I have been able to keep my diabetes and blood sugar under control and I’ve greatly reduced the amount of medications I have to take for my condition. And I’ve completely cured my sleep apnea.

Russell has maintained his weight loss for a year now.