Weight Loss Success Stories: I Dropped 60 Pounds To Save My Heart 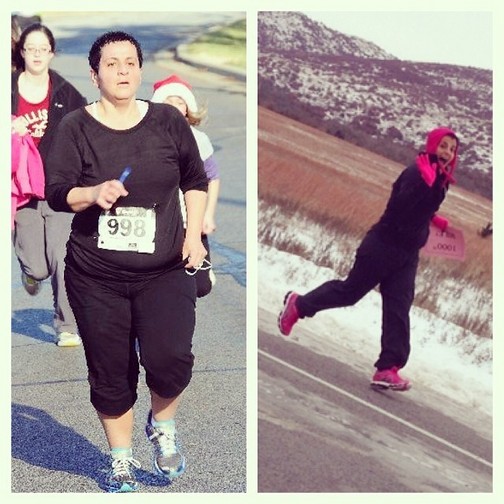 Walking into the gym just over a year ago I wasn’t just desperate to change my body but my mind. To this day few know the pain that preceded those months. It was the end of many years of one relational season for me, with no direction on what was next. I hated my size 16, 5 feet tall body. I hated my heart. That day I walked into the gym may have saved my life in more ways than one.
When I tweeted “it’s come to this” with a picture of my chubby legs on the treadmill, I was serious. It wasn’t a phase, and I knew it.

Every single day I went back to that gym. Some people commented I should rest. They were thinking of my body, but I was thinking of my mind. At that point size was less important than mental strength.

Soon after I struggled breathing through a 5K, trying to run again with exercise0induced asthma. On Dec. 15, two days after getting asthma meds, I ran a full 5K in a race at Longview Lake in Kansas City, MO. I cried when I saw the finish line because I knew I was home free—in that race, and in running. I could be a runner again. And if I could run, I would make it. That was actually the day I became a runner.

And I ran and ran. Mile after mile became mine. With each mile, my body became smaller and my heart became larger. I processed while I ran. What happened in June. What happened in July. The pain of August. The grief of October. The loss in November. The future I couldn’t see. The plans I had; the plans I wanted. The uncertainty. All of it left on the trails of Tomahawk Parkway, Meadowmere Park, Heritage Park, and Shawnee Mission Park. I trained on trails, on hills, on asphalt, on pavement. I trained in snow and ice, in cold winds, in humidity, in rain, in sun. I ran more and more.

My Jan. 1 resolve to run 500 miles in 2013 and enter a half marathon, quickly took a back seat to the day to day life of running; weight was secondary, but it was going. Running became my priority. When I went back to work with student teachers, I would plan which parks were near them. Almost every day I met with them, I had running tights on under my dress pants, a sports bra on under my dress shirt. I’d go from them to a park, do my supergirl change in the car and be on the trail before their school day was over. I remember celebrating 4 miles, then 5. Up and up it went. One day after a student teacher visit I went to Shawnee Mission Park (a very hilly one in the city) and ran my first 8-miler. I will never forget the joy of stopping at a Hy-Vee, sore and tired and getting that chocolate milk to repair my muscles before the 30 minute drive back to south Kansas City.

I remember blizzards, two in a row, and unplowed streets of feet of snow. One day I couldn’t get to the gym even. It was torture. The next day I got there, thanks to my landlord owning a personal snowplow so we could get out of our unplowed street. I ran a mile on the treadmill and couldn’t hack it anymore—and I ran out the front door and around the parking lot for 2 more miles. It was maybe 20 degrees and I had Capris on—and I felt like a freed bird. I felt no cold, only joy. Snow never held me back again. I lived in MO but worked for the University of Kansas, so at tax time I owed both states. I wrote a joyful check to Kansas, $70 I considered payment for plowing the trails and keeping me running all winter. By now I was in a size 10.

I remember running from the pervert at Longview Lake. Up the embankment and onto the highway, finding out I could run faster than I thought. Mr. Pervert was not keeping me from my long run, darnit.

500 miles was approaching quickly and I was close when I went to Fargo. On May 18 I ran my first half marathon and I think the high lasted for a week. I was a half marathoner. The girl who couldn’t run around the block.

I landed in humid College Station, TX teetering on a size 8, just in time for the summer and the heat. I felt certain it would kill me. The heat was bad but the humidity is oppressive. I became a (cranky) early riser. But I rose. I ran. I kept my mileage up–20 mpw minimum. It was not fun. I mostly hated all my runs there but I didn’t hate running, if that makes sense. It was my lifeline and I would be darned if heat would steal my life. So I ran anyway. I remember running around the housing development at 10 pm. So I could finish my last mile of the week. It was miserably hot, but I finished.

I finished 500 miles June 27 and celebrated by conquering my childhood fear of jumping off the high dive. I ran to the pool and did it, without a second thought. Then I rest my mileage goal for another 500 miles.

There are so many stories, so many runs, and even now when I look on my RunKeeper and see over 300 tracked runs for 2013 alone, I remember most of them. I look at the time, location and distance and memories come. They fill my mind with tales of victory. On sick days, injured days, even the day of more loss in January and the most devastating loss in October. Every run has a story, but in every story I win.

Running is living. It’s about going on anyway, about not making excuses. You don’t stop because you have a head cold or you’re hormonal or your back aches a bit. You don’t stop because you are on vacation or it’s too hot. It will never be the right time if you wait for it. Through running, I learned to eat to fuel. My running became so important that I ate to make it my best. No longer were cheese puffs a treat–they were an aftertaste I didn’t need on a 6 mile run.

I lost a lot of weight in this last year, somewhere between 55-60 pounds. An though that was the goal, I despise diets, tracking calories and limiting my foods. People swear by calorie tracking. I swear by running. I didn’t want to diet so I ran. I probably could have lost weight faster but I am having more fun. I have chocolate and frozen yogurt and lots and lots of carbs. I eat late at night, and I drink that poison everyone swears will make me fat—oh and lots of gluten (because if you aren’t sensitive to it, it doesn’t hurt you either). I ate processed foods some and take out when I had to. I was on the road a lot this year. I broke every rule that will mean no diet or nutrition company will use me as a spokes model, but I don’t care. I am a model of perseverance. I can’t say that about everything but this past year I have proven I can hang on—and I have found a will to fight, one that doesn’t depend on someone’s love or acceptance. In my greatest loss of love, I ran harder and longer and better and faster.

Few know what I went through to get out of PE as a kid—like that time I made a cast for my arm. Few know how much I hated running and would ditched school on the days I knew we had to run. Yeah, this is a big deal.

I end this first year with this tally:

I’m between a size 4 and 6 now. My small running tights were slipping down in my last race. My pace has dropped about 5 minutes a mile. And that aha moment that sent me to the gym, fat, discouraged, hopeless, became that cliched first day of the rest of my life.

I learned to run my body to a normal size–and to run my life when it seemed out of control. Every time I run, no matter what place I am in, no matter how long it takes me, I win.