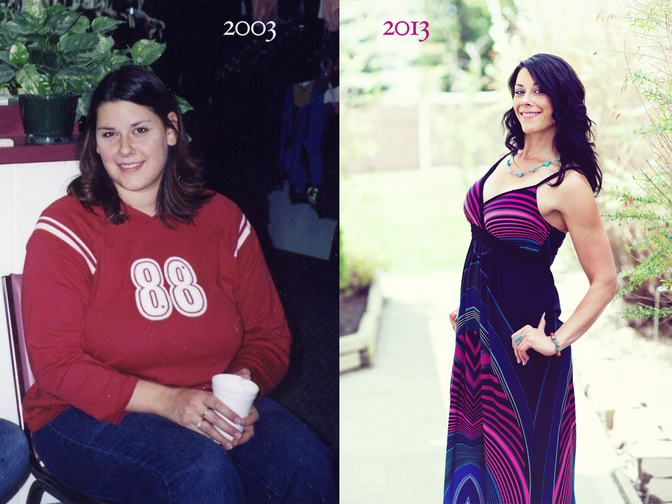 As long as I can remember, I’ve always dealt with body image issues. I don’t remember a time growing up that I was comfortable with my weight. My first real memory of struggling with my weight/body image/food was in boarding school. The food was mostly fried, or the food I enjoyed was fried anyway. I had a friend in boarding school who was bulimic, and I briefly tried to take it up, but I couldn’t stand making myself sick. So I stuck with the binging, and omitted the purging. In grade eleven I weighed 175 pounds.

My weight really started to climb after graduating. I remember clearly weighing myself a few months after having my first son and seeing the number 205 pounds on the scale. I was 20 years old. I’m 5′ 9″ so at least I’m tall enough that I can get away with a little extra weight. But seeing that I was in the 200′s was devastating.

The next time I weighed myself was 5 years later when I was pregnant with my second child and I was at my first prenatal appointment. “I guess this is the lowest number you’ll see in the next 9 months” the nurse joked as she slowly added more weight to the scale. She fumbled with the scale so much that I knew she had misjudged my weight by over 50 pounds. I stared at the final number in shock…235 pounds. My eyes welled up with tears, and as customary to hide my emotions, I made a joke of it. “Wow, I can’t wait to add another 40 pounds to that number!” I weighed 271 pounds the day I gave birth to my second son. I remember thinking I was as big as an NFL Linebacker.

I returned to work after my second son was a year old. I worked at a fire training school where I was surrounded by men and women who were fit and confident. I was neither. I went to the doctor for a checkup and was told that I had high-blood pressure and would have to go on blood pressure meds. I was 27 years old and on blood pressure medication!

On September 11th, 2003, I walked into my boss’s office and quit my job. September 11th was such an emotional day even more so being that we were a fire training school. After the memorial service, I decided I needed to get my life back in control. I had a great job, a great boss, and great co-workers, but I was miserable with myself and I needed to change that.

A few weeks later, we bought an acreage. Moving out to the acreage was amazing for our family. It gave me time and solace to work on my issues. I weighed in officially at 242 when I decided to change my lifestyle to a healthier one. I started reading everything I could about healthy living, and worked out to exercise DVD’s in my basement (the “Get Ripped” DVDs by Jari Love are amazing). I started journalling again, and wrote down everything I ate, drank, and every bit of exercise I did in a day. It was addicting! I realized that I was so much stronger than I thought.

I found an amazing network of women in an on-line forum who were also struggling with their weight. I had never really felt that type of support and commitment within a group before and when I didn’t feel like working out or when I felt like eating away my worries, they were always there to ground me.

Slowly but surely the weight began to come off. I loved the quiet of the acreage, I went for tons of walks in the country. This is where my passion for photography really began. I started seeing life in a new light. I pursued Photography as a career.

I reclaimed my life that year and decided it was worth living fully. I was no longer willing to live it on the side lines. There was a moment after a hard work-out when I sat back on the couch, red faced, out of breath, and sweaty and I couldn’t help but break out in the biggest smile. I couldn’t wait for my friends and family to see the changes on the outside that had already happened on the inside. It was definitely an “Aha” moment. I had NO doubt that I was going to reach my goal weight. It was just a matter of time, a lot of work, and commitment.

A few months later after being diligent with my diet and exercise, I weighed in at 198 pounds. I hadn’t seen that number in years. As quickly as that number appeared on my scale, it crepted back up into the 200′s and I realized I was pregnant with our 3rd child. I still continued to eat healthy and exercised regularly. Tessa Faith was born in September of 2004 and within 6 weeks of her birth I hit the treadmill and workout DVDs once again with the kids by my side in the privacy of my basement. I weighed in at 208, 10 pounds heavier than when I got pregnant with Tessa.

As well as daily workouts, I purchased a pedometer and upped my activity every week until I was stepping over 12,000 steps a day. I would look for inventive and new ways to get in more exercise. I learned if you blasted ABBA while cooking, you can’t help but shake your bootie. I learned to park farther away and to take the stairs instead of the elevator. I learned to add a little more activity into everyday tasks. I would even pace my basement at the end of a day while talking on the phone with my hubby just to meet my daily step quota.

On May 19th, 2005, I hit my goal weight of 165. It was an amazing moment seeing my goal weight pop up on the scale. Words can’t express what it felt like to reach my goal although I did so with a bit of trepidation as I knew keeping the weight off was a whole other journey!

Today, I weigh 160 pounds. I have kept the weight off for 9 years as of today, May 19th, 2014. I am finally comfortable in my own skin and have a zest for life that I lost for a few years. I want to support and motivate anyone who struggles with their weight and feels “stuck” like I once did. It’s a passion that I hope I never lose. I started a blog and continue to journal all the life lessons I’ve learned as I continue on this path to a healthier me. www.reclaiminglifeblog.com

Life is good!!! Live it fully and with joy!

From my heart to yours,
Christine