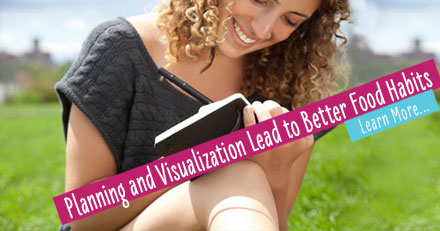 If you want to improve the way you eat, the best way to do so is to both make an action plan and visualize yourself carrying it out, according to McGill researchers.

“Telling people to just change the way they eat doesn’t work; we’ve known that for a while,” says Bärbel Knäuper of McGill’s Department of Psychology.”But research has shown that if people make a concrete plan about what they are going to do, they are better at acting on their intentions. What we’ve done that’s new is to add visualization techniques to the action plan.”

In a study recently published in Psychology and Health, Knäuper and her students asked 177 students at McGill’s New Residence Hall to set themselves the goal of consuming more fruit for a period of seven days. All the students in the study ended up consuming more fruit over the course of the week than they had before hand. But those who made a concrete plan, wrote it down and also visualized how they were going to carry out the action (i.e. when, where and how they would buy, prepare and eat fruit) increased their fruit consumption twice as much as those who simply set out to eat more fruit without visualizing and planning how they were going to do it.

These kinds of visualization techniques are borrowed from sports psychology. “Athletes do lots of work mentally rehearsing their performances before competing and it’s often very successful. So we thought having people mentally rehearse how they were going to buy and eat their fruit should make it more likely that they would actually do it. And this is exactly what happened,” says Bärbel Knäuper. This research points to a simple yet effective means of changing eating habits.

This research was funded by the Social Sciences and Humanities Research Council of Canada.