Out of the state of Indifference 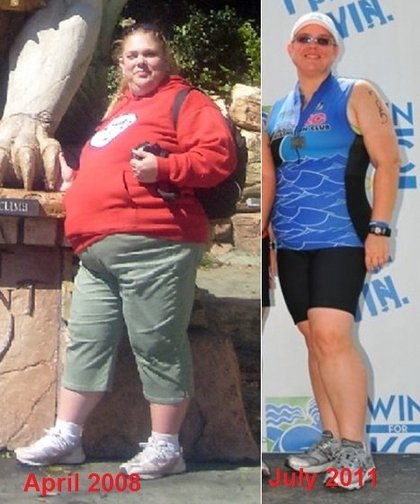 I have been overweight for a major portion of my life. That’s a long time to build up a tough skin to the realities of what it means to be obese, and I had all of the tools to live in my state of indifference.

I was indifferent to what my life choices were doing to my body both physically and emotionally, to the perceptions that people had of me as an obese woman, to the emotional scars that I was causing myself – for years.

I was indifferent to the damage I had caused my body by smoking since the age of 16. I smoked for 27 years – that’s more than half of my life at this point. I began having difficulty breathing, swollen legs, and frequent sinus and respiratory infections in 2007, so I took advantage of the fantastic health care available to me at work.

I had high blood pressure, high cholesterol – and VERY high Triglycerides. I chalked the high blood pressure and bad cholesterol levels up to heredity – sounded better than blaming myself. I had no idea what the triglyceride numbers meant and didn’t bother to ask, but was satisfied to know they could just prescribe pills to ‘take care’ of all of these problems.

I had blood work to check the cholesterol and triglyceride numbers every 3 months, and apparently there was another problem that they either didn’t tell me about, or I completely ignored (more likely). I was pre-diabetic. May 13, 2009, I was told that I had Type 2 Diabetes, and they suspected kidney damage. I weighed 292 pounds on that day. I faced the hard reality at that very moment that I HAD DONE THIS TO MYSELF – all of it.

RELATED:   How I Lost 130 Pounds: Adam Cuts Out Fast Food And Slims Down

I suffered through a few days of depression and denial. I was now taking 11 medications a day. I made a lot of dietary changes very quickly and saw some weight loss. I had found a new doctor who has supported and assisted me through this journey. In October of 2009 after some routine lab work I was given some more disturbing results. My kidneys were showing signs of damage. I was stunned and heart-broken. I had damaged my body beyond repair. Even if I lost weight my kidneys wouldn’t ‘heal’. At this point I could have just given up but I didn’t.

In December of 2009 a co-worker was talking about how much fun she had doing the Living History Farms race and it intrigued me. She was the kind of person who made me feel like I could do it too – but how, at my size, with my smoking? January 13, 2010, was my last cigarette. I started working out at the fitness center at my job. Weight wasn’t falling off of me, but it was coming off steadily. I had lost 30 pounds before my first 5K in April 2010. By the end of the race I was wet, cold, and happy to be done. I had been training for running with two co-workers since January, but I was disappointed with my lack of progress.

I’ve come so far now that I can almost laugh at how much I expected in such a short period of time. It takes time, it doesn’t happen overnight, but it is definitely worth it. In 2010 I completed 25 events including 5K’s, an 8K, and a half marathon. I wanted more. In 2011 the same co-worker who had gotten me excited about running convinced me to try a Triathlon. In 2011 I completed a 10K, 2 sprint distance triathlons, 2 half marathons and several more 5K’s…. and set the goals higher for 2012. I have 5 half marathons and 6 sprint distance triathlons on my schedule this year!

To date I’ve lost 92 pounds. I can see the 100 pound loss (and more) in my future, but I’ve come to start focusing on the healthy aspects, not just the pounds lost. My running stamina has improved significantly, and I still enjoy all of my training thoroughly. My husband has been my biggest supporter, and has made significant changes for himself and runs and works out with me daily, as have several friends and co-workers. Healthy lifestyles are contagious – it’s a fantastic trend to see, and I am proud to be an example of what CAN be.

Related Itemsrunning
← Previous Story Tim McCarthy and I Have Something In Common…
Next Story → Weight Loss Before and After: Lindsey Became A Proud Momma And Lost 50 Pounds