Weight Loss Before and After: The Janssens Walked Off 191 Pounds!” 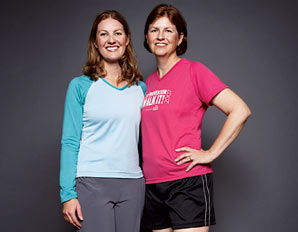 After losing 2 siblings to heart disease, the Janssens teamed up with Prevention to walk a half marathon.

The Janssens are a picture of theIowaheartland–especially at the dinner table. A true meat-and-potatoes family, they were taught to eat whatever was on their plates. And with 10 siblings, they learned early that it was better to take an extra scoop of mashed potatoes than end up hungry! Fast-forward a few decades and all that meat and potatoes (don’t forget the gravy), along with genetics, left the family with health problems, including heart disease and diabetes. Nine years ago, eldest sibling Claudia Meyer (now 65 and a Team Prevention marathoner) had a stroke, and doctors said she’d never walk again. In 2003, youngest brother Bruce passed away at age 47 from a blood clot, and a little over 2 years later sister Valerie, 57, died suddenly from a heart attack.

The family has seen no shortage of loss, but there is no shortage of love either. “It’s like having a twin with each one of our siblings,” says Nita Ott, 54. “You’re thinking about one of them, and suddenly the phone rings and it’s her.” It’s just that kind of serendipity that led the Janssens to alter their health destiny with a new family tradition: walking.

A year of change

In February 2007, Nita picked up a copy of Prevention at the doctor’s office and subscribed. The loss of her sister the year before had thrown her into a depression, and between that sadness, stress at work, and menopause, her weight had crept up 30 pounds without her even noticing. “I was using a rubber band to fasten my pants because I could no longer button them,” Nita says. “When the scale hit 193, I knew I had to do something. I didn’t want to top 200.”

When her first issue of Prevention arrived, Nita discovered a marathon-training program for anyone. Just as she was thinking, Hey, I can do that! The phone rang and her daughter Crystal Ayers was on the line. She had been reading the same magazine. “Hey, Mom,” she said, “Prevention’s doing this thing called ‘walk a marathon.’ Let’s do it!”

The plan quickly spread through the entire clan, and soon seven siblings, three spouses, eight children, and three grandchildren were on board to walk the IMT Des Moines half marathon (13.1 miles): a total of 21 relatives spanning ages 13 to 64. “It was time to do something to take care of ourselves rather than see each other at funerals,” says Nita. Plus, it was shaping up to be a party, and nobody wanted to be left out!

The first steps weren’t easy. “Before the training, my walking was mostly from the couch to the fridge,” says Nita. “The first night I walked, my whole body ached. Afterward I soaked in the bathtub forever.” But she walked the next day and the following one because she couldn’t let down her siblings. Within a week, the pains disappeared. “I’d never felt so amazing in my life,” she says. “I slept better and felt more fit than ever. When my 6-year-old energy bubble of a granddaughter visited, I kept up with her every step. And at the end she was the one asking for a foot massage!”

Going the distance together

Sharing a common goal gave the family a way to stay connected, even though they’re scattered across six states. Every week e-mail chains full of encouragement and tips flew throughout the family. Despite different schedules and time zones, their cell phone calls often coincided with their walks. “I was walking one morning inIdahowhen I got a call from Lois,” recalls Nita. “She was training inIowa, so we walked ‘together.'”

Nearby family members strengthened their bond by exercising side by side. “My two daughters and granddaughter told me all about their lives as we walked,” says Lois Pote, 57, who dropped 25 pounds. There was a bit of healthy competition, too. “The highlight for me,” says May Smith, 47, “was when my 17-year-old said, ‘Mom, can we slow down yet?'”

The adrenaline on race day–a perfect sunny October Sunday inDes Moines–was contagious. Even though they were gathered at 4 am after a weekend of get-togethers and little sleep, everyone had plenty of energy for a rousing chorus of “We Are Family”–Nita’s favorite training song–by Sister Sledge. When the gun went off, the crowd of 5,000 walkers and runners made it impossible to keep the whole group together. Still, nobody walked alone. “I was so nervous, my hands were shaking,” says Lois, “but doing it with my daughter Heidi made me feel safer.”

Over the miles, family members walked in small groups, catching up on news in their lives, sharing emotions, telling stories, and encouraging each other. “When my blisters started acting up at mile 6, Heidi distracted me with a game of ‘let’s see who we can catch ahead of us,'” says Lois. Even Claudia, back on her feet despite doctors’ bleak prognosis 9 years ago, took part in the walk–65 pounds lighter and feeling “twice as good as ever.” For Nita, crossing the finish line with her sister-in-law Stephanie, who had been married to her brother Bruce, is a memory she will never forget. Heart disease may have claimed Bruce’s life, but the Janssen family is walking toward a promising new future. “There are events that you look back on and know that your life just changed forever,” says Lois. “This was one of those once-in-a-lifetime moments, not only for me, but for our entire family.”

Related Items100 Pounds LostOver 100 Pounds LostrunningSEOwalking
← Previous Story Heather’s Journey to becoming a skinny diva
Next Story → Before And After: Clovis Lost 87 Pounds To Be There For Her Sons