Weight Loss Before and After: Anne Marie And Keith Slimmed Down Together 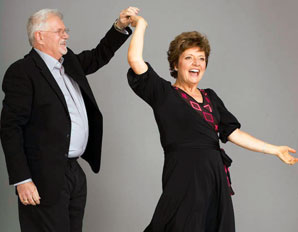 Faced with mounting health problems, Anne Marie and Keith Bisner teamed up to slim down–and revived the romance in their marriage!

At an appointment, Keith’s doctor told him that his high blood pressure, high cholesterol, and weight gain put him at risk of a heart attack. Meanwhile, Anne Marie was gobbling four to five antacids at a time for severe heartburn. Determined to avoid cholesterol-lowering meds, Keith heeded his wife’s suggestion that they join Weight Watchers and ditch the weight for good.

How They Did It

Keep it fresh. Every week, the Bisners tried something new. Anne Marie scoured magazines for recipes for Keith to try (they share cooking duties), while Keith looked for exercise gadgets and tapes that his wife might like. Now, instead of dousing veggies in butter and cheese, Keith grills and roasts them. Instead of red meat, he’s learned to cook fish and chicken. Together, they take turns dreaming up new ways to exercise together, which has included historic walking tours of local cities, cross-country skiing, and long bike rides.

Set, specific attainable goals. Every week, the Bisners challenged themselves to strive toward a new milestone, such as exercising an extra 5 minutes, not having seconds at meals, or drinking eight glasses of water a day. “Goals need to be defined so they can be measured,” Anne Marie says. And if they met their goals, they rewarded themselves: Typically Anne Marie would treat herself to new clothes or jewelry, while Keith would suggest joint outings, such as bowling or dinner and a movie.

Be honest, but positive. Choosing their words carefully helped the couple nudge each other toward healthy choices. Rather than ask Keith whether he was going to exercise on a given day, Anne Marie would ask, “What are you doing for exercise tonight?” And instead of criticizing Anne Marie for eating something, Keith simply reminded her to journal it: “You bite it, you write it.”

RELATED:   Weight Loss Before and After: I Dropped The Weight With Portion Control

Offer praise. Since embarking on their weight loss journey, Keith has made a point to compliment his wife–something he rarely did before. “It just makes me melt,” Anne Marie gushes. Anne Marie has done the same, especially when Keith really wasn’t in the mood to exercise, but still did it. “I’d tell him, ‘I’m really proud of you,’” she says.

Besides nixing the antacids and dodging the cholesterol medication, the Bisners have revived the romance in their 35-year marriage. Their renewed displays of affection have even helped them overcome moments of weakness. Instead of overeating, they give each other 40-second hugs, which is often all it takes to get over a craving or improve a bad mood. Best of all, they can now cuddle together on the same couch.

“Before we were so big it wasn’t comfortable,” Anne Marie says.