One Year Later and the Weight is Still Off! 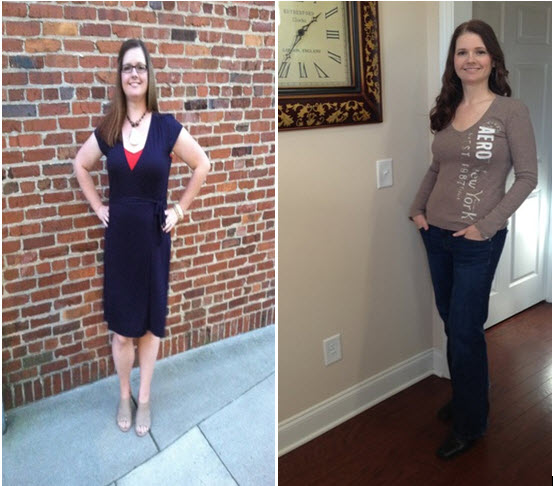 I am a 39 year old mother to 3 children ages 19, 13, and 7. I grew up as an active, athletic kid and never really had a weight problem. After having my first son and gaining 60 pounds it all went downhill.
My desire to be active was traded in for sleepless nights and trying to juggle raising a child and going to college. That downward spiral continued through the birth of my two daughters and the weight kept packing on, my heaviest being 245 pounds. Fastfoward 6 years…

In May 2012 my husband came to me and said that his doctor recommended he lose weight to help with his high blood pressure problems. Knowing I was overweight, but never really concerned about it I decided that I would take the weightloss journey with him. I set a goal of 75 pounds lost, not knowing if I’d ever reach it, but it was something to work toward. We started a weight loss program and I immediately gave up all sugary carbonated sodas (my main weakness). Our exercise was simple, to walk together daily. We started with only a mile around our neighborhood and gradually increased it over time. We walked until it got to cold outside. I took advantage of my school’s gym and the treadmill and my husband took to the recumbant bike we owned to try to keep moving. Months went by and the weight was coming off. There were only two times that I did not post a loss during my time on the program.

RELATED:   Weight Loss Before and After: Bethany Lost 115 Ponds And Got Active

March 2013 marked the month that I offical met my weightloss goal of 75 pounds. It was incredible! Little did I know that I wasn’t finished.

Mid-March I walked/ran my first 5k with a friend just for the fun of it. She told me later about a Couch to 5K program that our local running club was putting on in April. I went to the information session and offically joined the program. From the start of that program I was hooked! I started as a runner doing 5:1 intervals (run 5 mins., walk 1 min.) working up to a goal of running a 5k. 3 days a week from April through mid-June we trained. 2 days as a group and the 3rd day on our “own”. Once the race was upon us my goal was not only to finish it, but to run the entire race, not interval it. I did it and in a much faster time than I anticipated. I immediately signed up for my next race which was a 10k to take place on Labor Day weekend. That race came and went and I was looking for my next race. It just kind of happend upon me, but the next thing I knew I was training for a 1/2 marathon that was being held in October. All the time I was training I was continuing to lose weight, I couldn’t seem to eat enough. After running my first and my second 1/2 marathon (in November) I was down a total of 90 pounds.

One year later and I am still down 92 pounds. I weigh the same as I did in high school and it has been amazing. I think what helped make me so successful is that I never looked at what I was doing as a “diet”. I made a lifestyle change and have been able to stick to it without feeling deprived or like I was missing out on things. I still eat things I want. I’m just smarter about how much and how often I eat certain things. I have learned to modify recipes, portion sizes and maintain my exercise to help keep the weight off. I’m officially finished losing weight and have spent the last year in maintenance. Thanks to the inital program my husband and I were on and the available online/mobile tools that I have at my fingertips I have the ability to continue to be successful for years to come.

I try to help those that ask for it and share my story and my tips, never being judgmental or putting someone down if they “slip up”. Lord knows that I slipped up plenty of times along the way. I just made sure to adjust when necessary.

I am so much happier now with who I am and my kids are happier for me as well, which in the end makes it all worth it.

Related Itemsrunningwalking
← Previous Story 60 Pounds Lost: A Mom’s Journey
Next Story → Weight Loss Before and After: I Lost 102 Pounds In Only Eight Months